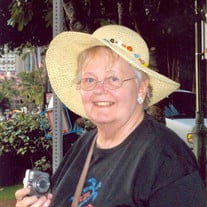 Joan Devine, age 81, passed away at her home in Port Orchard, surrounded by her family on Thursday, February 23, 2017. She was born Oct. 28, 1935 in Bemidji MN and the last of ten children to Sydney and Ruth Strassburg. Joanie lived in Alaska and went to school in Bremerton. She married Leroy Seymour and together they had 2 children, Darrell, and Diane. Joanie later married Ralph Devine and adopted Ralph's young son, Christopher as her own. Joanie worked at Montgomery Ward's for many years in Richmond Calif. as a sales associate in catalog, then in furniture. Upon the move to Wa she, worked at a scuba diving mfr, then an accounts manager for a hospital in Aberdeen, Wa. To supplement her income, she sewed and crafted, selling her items at numerous bazaars in Western Washington. Joan's special interests and hobbies include quilting, and sewing. Some of her favorite pastimes were spending time with her grandchildren and great grandchildren, visiting her niece Thea Coppini in CA, shopping, and spending time with her daughter Diane, attending all of her grandchildren’s weddings and most recently a cruise to Hawaii with daughter-in-law Sara. Joan loved attending Crossway Church in Port Orchard and the wonderful people she came to know there. Her friends meant everything to her. Mom had the best laugh, so endearing and contagious, and was fun to spend time with. She is survived by her children, Diane Daly of Tacoma, Darrell Seymour (Donna)of GA, and daughter in - law Sara Devine. She is preceded in death by her son, Christopher Devine, Dec. 30, 2015. Grandchildren include Shannon Coleman (Grant) , William Daly (Altagracia) and Sarah Ono (Grant) Great grandchildren Emma and Olivia, Ava, Cole and Brock. Mom was patient, kind, understanding, non judgemental, unassuming, polite, and loving. She lived to cook and have friends and family for dinner, A memorial service to honor the life of Joan Devine will be held on Monday, March 6th at 1:00pm at the home of Sara Devine- directions given at service.

Joan Devine, age 81, passed away at her home in Port Orchard, surrounded by her family on Thursday, February 23, 2017. She was born Oct. 28, 1935 in Bemidji MN and the last of ten children to Sydney and Ruth Strassburg. Joanie lived in Alaska... View Obituary & Service Information

The family of Joan Lorraine Devine created this Life Tributes page to make it easy to share your memories.

Joan Devine, age 81, passed away at her home in Port Orchard,...