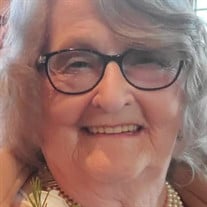 Joanne Carol Petersen, of Bremerton, Washington passed away on Sunday, December 6th after a short illness. She is preceded in death by her husband Michael Petersen, her mother, father and brothers. Joanne was born in Seattle on February 3rd, 1938 to Francis Henry Boddy and Ferne (Niblock) Boddy. She had a magical childhood, growing up in Port Orchard as the only girl with four older brothers: Don, Bruce, Richard and Roger Boddy. She was very much a daddy’s girl. Joanne attended South Kitsap High School, graduating in 1956. She was beautiful, friendly and a bit crazy. She proudly attended class reunions whenever she could in order to maintain contact with her lifelong friends. After high school, Joanne married Thomas Horn whom she shares three of her four children. Joanne became active in Kitsap County archery and was so talented with a bow and arrow she was invited to the Olympic Trials in 1962. During this time, Joanne’s circle of friends was large, and she maintained those friendships throughout the years. As a second generation worker at Puget Sound Naval Shipyard, Joanne would commute every day with her father Francis to work from Port Orchard. After moving to Concord, CA in 1974, she worked in supply at the Concord Naval Weapons Station. When Joanne and her family moved back to Washington State in 1981, she finished her career at NUWC Keyport, Washington where she was a logistician with the BEAST program. She was very proud of her time working for our country and contributed greatly to our nation’s defense. In 1972 Joanne married the man of her dreams, Michael Petersen. Married to Mike for over 40 years, she lived the life of a Navy wife, raising now four children, often single handedly while Mike was out to sea. Mike passed away in September, 2015. After retirement and throughout her life, Joanne did what she did best, she cared for everyone - caring for her mother, her husband Mike and her many beloved children, grandchildren and step-grandchildren, nieces and nephews. Her home was the central hub for the family who always knew that they had a welcoming place to land while they traversed life’s ups and down. She was always there for everyone. In recent years, Joanne reconnected with a past love, Thomas Lardner who blessed her with a joy and love that lit up her soul. He and his family’s love for Joanne made the final years of her life happy and blessed. More than anything, Joanne loved her children: Karrie Rae McGuirk of Bremerton, WA, Kenneth Horn of Oak Harbor, WA, Susan (Suzie) Simms of Bremerton and June Blaser of Silverdale, WA. Her children were her life. There is nothing within her power that she would not do for them and as a result, she leaves a legacy of strength, humor, love and compassion that will continue on through her 12 grandchildren and 14 great-grandchildren. Joanne leaves behind her children, grandchildren Brandon Knight, Jacob Horn, James Peterson, Jori Gable, Kellie Baker, Rachael Larson, Melanie Alexander, Carina Neale, Franny Kosten, Matthew Dentinger, Jamie Blaser and John Gierard. She also leaves great grandchildren Sydney Larson, Mackenzie Potts, Addy Baker, Bailey Potts, Gavin Baker, Gavin Horn, Kaylie Baker, Grace Horn, Hayden Baker, Addy McCook, Chevy Blaser, Ferne Alexander, Nate Blaser and Kai Alexander (and another on the way). Step Grandchildren include Brandon Tilton, April Muns, and Chanelle Highley. Nieces and nephews include her lifelong best friend, Diana Tietz, Don Boddy Jr., Lynette Krache, John Boddy and Mike Boddy.

Joanne Carol Petersen, of Bremerton, Washington passed away on Sunday, December 6th after a short illness. She is preceded in death by her husband Michael Petersen, her mother, father and brothers. Joanne was born in Seattle on February 3rd,... View Obituary & Service Information

The family of Joanne Carol Petersen created this Life Tributes page to make it easy to share your memories.

Joanne Carol Petersen, of Bremerton, Washington passed away on...