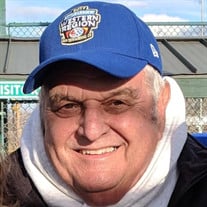 Joel (Joe) E. Guariz (76) passed away unexpectedly on January 23, 2022. Living all his life in Washington State, Joe attended school in Seattle from elementary through high school, graduating from Rainier Beach High School. Joe continued his education at Yakima Valley College and Central Washington University, earning his teaching degree and starting his career in education in the Seattle School District. He played football and baseball in junior high and high school and coached football in Seattle. He eventually transferred to Bellevue and retired from the Bellevue School District in 2001. Joe then worked for the Bellevue School District managing the football stadium for two more years. He worked at PACCAR-Seattle, driving back and forth from Yakima on his breaks from college. Joe served two tours in the Navy and, after he was discharged, served in the reserves and taught Navy survival training. Ever the outdoorsman, fishing was in his blood and he loved to crab and fish in salt water, exploring remote lakes around Washington, and fishing from a very early age with his buddies, and often his younger brother Greg, in tow. For years he would attend the last day of class as a teacher, then the next day hop on the first flight in the morning to spend the summer as a fishing guide in Alaska with his cousin. Back home, he was the go-to man for his friends’ Washington/Oregon fishing reports until his single life went on another path. But he kept in touch with the web of friends he had accumulated over his years in Washington and beyond. Later on, Joe and Margaret and their son Bill spent many happy days fishing and crabbing on Puget Sound. Hunting was also a pastime, hunting in Alaska for Caribou with his son, brother and cousin: Washington for deer and birds with assorted friends and family, and Wyoming for Antelope and Elk with his brother and cousin. He also loved sailing and took part in sailing the TransPac from California to Hawaii. He sailed throughout the Northwest, and he and Margaret spent numerous times in the summers with friends motoring throughout Puget Sound, and north to Princess Louisa Inlet and on to Desolation Sound in Canadian waters. Seeking more adventure, he took up skiing and skied in the Western States taking Margaret and Bill cross country skiing and taking Margaret and Bill and Bill’s friends on multiple ski trips in Washington and Idaho, only stopping when he was five years from retirement and felt he needed a new direction. Then, he and Margaret continued on eventually ending those adventures with snowshoeing on Snoqualmie Pass and Hurricane Ridge Port Angeles. Joe took his new family in a pick-up truck and flatbed trailer, tenting up the Alaska Highway, over the Top of the World Highway, stopping in Chicken, Alaska to pan for gold, and on to Anchorage and the Kenai River where he entertained them with days of king fishing, digging for razor clams, and stories to tell of past adventures. Then, they drove down the Cassiar Highway, stopping at Hyder, Alaska where Margaret had family connections, and back home. After retirement and moving on from numerous friends and family tent camping and day hiking journeys, and moving to Manchester, he and Margaret purchased a small travel trailer, graduating to a larger travel trailer camping throughout the Northwest, California, Montana, Nevada and North and South Dakota exploring new places and visiting many National Parks and Monuments as they went. They took a cruise tour of the Mediterranean, and a much-loved river cruise on the Rhine and Moselle in Germany to celebrate their 30th wedding anniversary meeting new friends they still keep in contact with along the way. He adored his grandchildren and was happy to be involved in their lives - attending coach pitch games, school recognition events, little league baseball games, soccer games, and gymnastics practices. He will be dearly missed by family and friends. Joe is preceded in death by his mother and father, Bertie and Joseph Guariz. Joe is survived by his loving wife, Margaret, Manchester; son Bill (Kris) Duncan, Walla Walla; two grandchildren William and Molly; his brother Greg (Deanna) Guariz, Manchester; two nieces Jody (Jordan) Smith, Puyallup; and Gina (Zach) Cain, Gig Harbor; and three grandnieces Layla, Lexi, and Zoey. Also, by extended family in Alaska, California, Washington and Canada. Memorial donations can be made in his name to Ronald McDonald House, Children’s Hospital, or St Jude’s Children’s Research Hospital. No services are scheduled at his request.

The family of Joe (Joel) Enrico Guariz created this Life Tributes page to make it easy to share your memories.