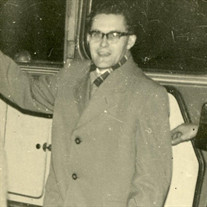 Born in Rotterdam Netherlands on June 24, 1931 to Johannes and Betsy Padmos. On March 5, 1957, with only a small crate of belongings and a suitcase, he boarded a bus from his home in Rotterdam Netherlands, and began his immigration journey to the United States. Like so many before him, he was full of hope, dreams and belief in the American dream of building a good life in a country with so many opportunities. In Salt Lake City, Utah, he met and fell in love with, Susanna Van Amen, another first-generation immigrant from the Netherlands. They were married on March 15, 1958. He always said she was the best thing that ever happened to him. He loved her authentic Dutch cooking. If asked what he wanted most out of life he would tell you, “That my children do better than me, and their children better than them.” He had two sons, John and Robert. He became a master craftsman in layout and steel fabrication working for EIMCO for over 20 years, and received the Governors Craftsman Award for excellence in his trade. After retiring, he loved to take cruises around the world. His favorite was cruising the Panama Canal. He is survived by his wife Susanna Padmos, sons John (Elena) and Robert (Mary Gayle), grandchildren – Robert Padmos (Tasha), Justin Padmos (Jessica), Brian Padmos, Nicole Padmos, Jered Padmos, and great-grandchildren – Morgan Raine Padmos, Mara Padmos and Calvin Padmos. He was preceded in death by his parents Johannes and Betsy Padmos, and brothers Piet Padmos (Corie) and Rinus Padmos (Lida). We will miss him very much.

The family of Johannes Padmos created this Life Tributes page to make it easy to share your memories.