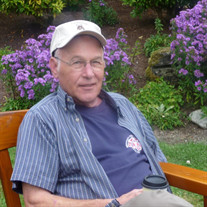 John was born to John and Loretta Laha on March 1, 1943 at Puget Sound Naval Shipyard Hospital in Bremerton, Washington. He married his wife, Donna, in 1965. They have three wonderful sons, Ken (Betty), Tom (Joanne), and David (Suzanne) who blessed them with nine grandchildren and four great-grandchildren. He has two sisters, Linda Bell Dryden and Laureen Crabb. He told me early on that he did not do weeding, and he was true to his word. He grew up in Port Orchard, graduating from South Kitsap High. His graduating his class is very close and has yearly informal reunions. He worked at the Puget Sound Naval Shipyard for thirty-three years starting out as a shipfitter apprentice then went to the design division ending up in nuclear supply at the time of his retirement. Also a member of the Port Orchard National Guard from 1964 through 1970. Boot camp was in Fort Sill, Oklahoma, where he met a lifelong friend Harry Honnald. Our families became very close and spent many times on Hood Canal, at his parents' cabin, crabbing and shucking oysters, creating amazing memories. He went into partnership with his wife's boss, opening a drive-thru espresso (Supreme Bean), managing it for eighteen years. He loved hanging out and talking to the customers and baristas. He was a genuine people person. He enjoyed many years on their thirty-six-foot classic wooden boat cruising the waters of the Puget Sound and Canada with fellow boaters from the Port Orchard Yacht Club; always making new friends along the way. His grandchildren meant the world to him and he enjoyed attending their sporting events and, of course, bragging about them. He always had a pocket full of mint-o-green lifesavers to share. When out driving, there wasn't a casino he could pass by. He was a loving, caring, kind man and will be sorely missed. Donations can be made to the Kitsap Rescue Mission, 810 6th St., Bremerton, WA 98367

John was born to John and Loretta Laha on March 1, 1943 at Puget Sound Naval Shipyard Hospital in Bremerton, Washington. He married his wife, Donna, in 1965. They have three wonderful sons, Ken (Betty), Tom (Joanne), and David (Suzanne) who... View Obituary & Service Information

The family of John Anthony Laha created this Life Tributes page to make it easy to share your memories.