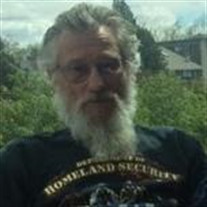 John (Larry) Scott passed away on 5/22/19 surrounded by family and friends in his home he created on the Scott homestead Port Orchard, WA. He was born 12/27/1946 in Kadoka, SD. He is preceded by Mother Clara, Sister Kathryn & Son Lenny. He was a Son, Husband, Father & Friend. Larry served with the Navy from 1963 through 1966 as a Yeoman. He worked in the fisheries department, then took a job at the Naval Shipyard as a Marine Mechanic where he took an early retirement to really do what he loved which was working outdoors. He helped everyone and anyone with his Kabota tractor pushing dirt around making roads clearing land, creating masterpieces. He was the Chief Range Safety Officer at the Poulsbo rifle and pistol club. He wanted everyone to learn about guns and if handled properly how safe they are. He was at the range sometimes daily creating and expanding. If he wasn’t at the Range you could find him either hunting or fishing. Larry wanted every generation to be involved in hunting and fishing. Went often with good friends Danny, and Cory Walker, his son Bruce in Colorado and, took his grandson on his first hunting trip at age 9. I think his fondest memories would be his trips to Montana with his best friend Herrell. Larry would take time to spend with every family member whether it be spending weekends visiting his dad, nieces and nephews in Lebanon, Oregon, camping with his daughter and her boys, or taking a trip to Colorado with his wife to visit his son Bruce and his family. Larry was all about family and if he could have moved all family next to him he would have. Time with family was more important than time spent elsewhere. He leaves behind his Father Bob, his Wife Nancy, Daughter Brandie, Son Bruce, Nieces Sara, Jodie, Kathy, Nephews Steve and Scott, Niece Tina, Grandchildren Devin, Ty, Collen and Abby, Great nephews and nieces.

John (Larry) Scott passed away on 5/22/19 surrounded by family and friends in his home he created on the Scott homestead Port Orchard, WA. He was born 12/27/1946 in Kadoka, SD. He is preceded by Mother Clara, Sister Kathryn & Son Lenny. He was... View Obituary & Service Information

The family of John "Larry" Scott created this Life Tributes page to make it easy to share your memories.