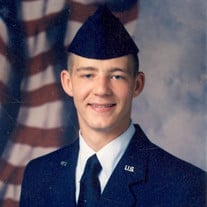 John Dewayne Smith was born on May 13, 1980 in Salem, Oregon He received his Angel Wings for Heaven on February 18, 2017 at 3:22PM in Tacoma, Washington. John has always been a very important person in our family , He was the most Amazing Son, Wonderful, Loving Brother and Outgoing, Fun Uncle. He will be missed forever . John was a very energetic boy and the energy carried on into his Adult life. The Family moved to port orchard in 1991 where john went to Orchard Heights elementary, followed by Marcus Whitman Junior High School and onto South Kitsap High School where he Graduated in June of 1999. After High School John decided to join the Air Force Reserves in 2000 and In 2001 went Active Duty. John served as a Jet Propulsion Mechanic, he reached the Rank of Senior Airmen. On August 7, 2006 John's life took a devastating blow, while he was stationed in Rota Spain he was in a horrible car accident which left him with a Severe Traumatic Brain Injury (TBI). John continued to live his life for the next 10 ½ years unable to walk, talk, eat or care for himself in any way. John had multiple caregivers at one point his mother cared for him for a short period. His sister Sonja began caring for john for 9 ½ years and found some amazing care givers (Dante Ganaden and Lory Cabalum) whom also cared for john for 3 years. John traveled to many different locations for work and play throughout his career in the Air Force. John was very athletic, he played baseball while in the air force and football for fun. He greatly enjoyed watching NASCAR Racing. He also enjoyed Skiing with his cousin DJ, Bowling, Tennis, Golfing, Playing video games and working on cars. John did have the opportunity to get married during his short life to his high school sweetheart Crystal Fisher. Unfortunately things didn't work out and they divorced a short time later. John did want children but that dream never came true for him, so the next best thing was his nieces and nephews, he truly loved every single one of them with all of his heart. Family meant the world to John. On February 18, 2017 John lost his long excruciating battle from his car accident injury. John is survived by: Mother : Linda Orton Sisters: Leilani Smith, Sonja Smith, Brandy Larsen Brother: Christopher Orton Nieces: Melyssa Smith, Megan Larsen, Samantha Larsen, Makayla Fults, Brooklyn Terell, Ember Orton Nephews: Justin Smith, Stephen Larsen, Easton Orton, Jeramiah Sharp Great Niece: Melodi Rohring

John Dewayne Smith was born on May 13, 1980 in Salem, Oregon He received his Angel Wings for Heaven on February 18, 2017 at 3:22PM in Tacoma, Washington. John has always been a very important person in our family , He was the most Amazing... View Obituary & Service Information

The family of John D Smith created this Life Tributes page to make it easy to share your memories.