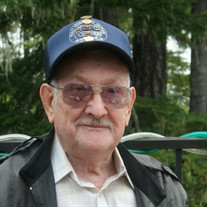 Johnnie (John) Ira Cave passed away peacefully with his family around him, on April 26, 2017 in Bremerton, Washington after a long illness. John's lifetime was spent in service to others and to his country. He was the only son born to Ira S. Cave and Marie Alberta Cave (Prestage) on December 9, 1933 in Kalispell, Montana. He lived in Plains, Montana most of his youth, until beginning his military service by enlisting in the U. S. Navy at the height of the Korean war. He married Shirley D. Cave (Kangas) in November 1954. They had four children together. John had a long career of service. In the Navy he was trained as a pipe fitter and spoke often about serving on board the USS Jason. His naval adventures took him to Hunters Point, Naval Station San Diego, Norfolk Naval Shipyard, Pearl Harbor, Japan (Tokyo, Yokosuka, Sasebo, Okinawa), and the Philippines (Subic Bay and Manila). John served as a Naval recruiter. He worked for the U.S. Forest Service as a ranger at Glacier National Park. He was a forest firefighter and a smoke jumper out of Missoula, Montana, as well as a heavy construction and mill worker. In 1966, he was hired as a pipe fitter at Puget Sound Naval Shipyard, then furthered his civilian career through promotions to various positions before retiring as a Nuclear Inspector in the early 1990s. John had a great sense of community. He served as a volunteer fireman in Central Kitsap at Lake Tahuyeh and the Seabeck/Crosby area. He was a member of the Crosby Community Club, where he enjoyed the picnics and the dances. He was a student of history, literature, and motorcycle maintenance. John called himself an "armchair historian". He enjoyed researching the life and explorations of David Thompson, the American Civil War and WWII. He loved to learn and stay up to date late in his years. Johnnie loved Montana and always spoke of returning there. He loved animals, great and small. His favorite past time in his later years was feeding the deer, squirrels and birds that visited him daily. His friends will miss his presence. John is survived by his children, Jacqueline Sires, Norma West, and John M. Cave, as well as one sister Dorothy (Dottie) Benson. He is preceded in death by his wife, Shirley, his father, mother, sisters Daisy Dean and Norma Josephine, and son, Robert. At the time of his death, John had eleven grandchildren (9 living) and fifteen great grandchildren (14 living). A celebration of his life will be 2 pm Friday, May 12, 2017 at Rill Chapel's Life Tribute Center.

Johnnie (John) Ira Cave passed away peacefully with his family around him, on April 26, 2017 in Bremerton, Washington after a long illness. John's lifetime was spent in service to others and to his country. He was the only son born to Ira... View Obituary & Service Information

The family of Johnnie Ira Cave created this Life Tributes page to make it easy to share your memories.

Johnnie (John) Ira Cave passed away peacefully with his family...