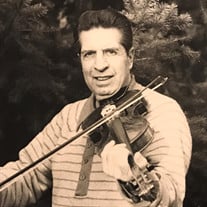 Born to Arthur Jeremiah Dupuis and Lydia Rezendez Dupuis at 259 Fountain St in Fall River, Mass. He was known as "Archie" to his family, then as Joseph once he entered the military. He had an older half sibling; Joseph Tavares and was the eldest brother to Raymond, Maurice, Wilfred, Robert, George and Rita. He is survived only by Rita (Dan) and Raymond. He was also survived by his wife of 42 years Connie, and children Sarah (Micheal), Joseph (Amber), and Jannelle (Warren). His grandchildren are Derrik, Jordan, Andrew, Alexis, Michael, Aeris and Braylon. Words that describe his life: musician, collector, saver, inventor, handyman, honest, political, religious, loyal, trustworthy Favorite stories of his life: He claims he invented the skate board, was friends or neighbors with various infamous people such as Marilyn Monroe, Thomas Edison, Anne of Green Gables, President Kennedy and Walt Disney. Education: Our lady of Lords grammar school, Jamaica Plain, MA, Braindies Vocational School in Boston, MA, Massachusetts Radio and Telegraph, Military School in Wichita Falls, TX, Industrial Tech School in Boston, MA, Transformer Test School Roxbury, MA, Armature ham radio license, Real estate license in CO. Accomplishments: being a musician, traveling Europe and North America, getting married and having a family, living to 89 Military: Korean War Vet, Air Force 1950-1954- Nellis Air Force Base, Las Vegas. Nation defense Service Medal and Good conduct Medal. Honorable Discharge Fondest memories: Watching him play fiddle- he would really get into it. Camping on the Oregon coast each summer. Laughing at his crazy inventions and contraptions. Occupation: Electronic mechanic, Naval Undersea Warfare Engineering Station, Retired in 1993 Family activities: He loved playing fiddle at any family function. Favorite Song: Down yonder Personal activities: He loved old time fiddle music and played in his Band "The Country Cousins" at Roaring Camp in Felton, CA and Shakey's Pizza Parlor in the 1970s. He was also co-founder of the Santa Clara Fiddlers Associatation. He continued to play as a hobby in his spare time and at Assisted living homes in Port Orchard, WA for as long as he could. He loved watching TV; the 700 club, Walker Texas Ranger and the news, especially the weather and political channels. Money, politics and religion were his favorite subjects to talk to you about. His faith and relationship with God was very important him. Favorite color: blue

Born to Arthur Jeremiah Dupuis and Lydia Rezendez Dupuis at 259 Fountain St in Fall River, Mass. He was known as "Archie" to his family, then as Joseph once he entered the military. He had an older half sibling; Joseph Tavares and was the eldest... View Obituary & Service Information

The family of Joseph Arthur Edward Dupuis created this Life Tributes page to make it easy to share your memories.

Born to Arthur Jeremiah Dupuis and Lydia Rezendez Dupuis at 259...