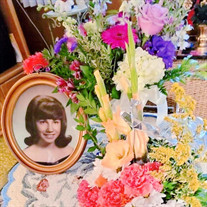 On October 25, 2021, a beautiful human being by the name of Judith Christine Cook lost her battle with cancer. Judy was born Judith Christine Henry at the original Harrison Memorial Hospital on Chester in Bremerton, Washington. She was born on January 4, 1947 to Gerald and Elaine Henry. Judy had a very high IQ. She had many talents interests, among which included: sailing, archery, sewing, cooking, surfing, fishing and bowling. Judy was a very talented seamstress. She had an extensive portfolio of complex canvas work she had done on boats. Judy did boat exteriors that included: Biminis, Dodgers, enclosures, sail covers, windows, hatch covers as well as Binnacle covers. Judy even made the Mylar sails that were used in the "America's Cup," International Yacht Races. She did interior work involving curtains and cushions. Judy made assorted canvas gear bags and she even made clothes. She also did some of the best varnish work on yachts that I've ever seen. Judy was a very good cook. She cooked for many prominent and influential people on large, multi-million dollar yachts. Judy learned to cook from her mother, Elaine. Judy once mentioned of driving a Rolls Royce numerous times to pick up supplies for one of those yachts. Judy was a walking encyclopedia of boat knowledge. From frigates to sloops, such was her passion for boats, that she knew everything about all of them! Why they were built a certain way and for what specific purpose. When they were first built and why. She even knew what every single bolt, line, etc....was and what it did - on every single boat or ship ever built. She was amazing! Anyone who talked with Judy for even five minutes, knew how unique she was in her vast, extensive and comprehensive knowledge of boats. As passionate about boats as Judy was, she was equally kind to people and animals. Judy had a heart of gold and people saw that. She knew no strangers. People liked Judy as soon as they met her. Judy had many stories about the many celebrities she had met throughout her life. Among those names were, Alice (Vern) Cooper, Joe Namath, Jimmy Dean, Roy Clark, David Crosby and band members of Three Dog Night and Chicago. These are just a few of many. Judy, indeed, lived an interesting life. Judy worked at Boeing and at PSNS as a certified Draftsman before she became so interested in boats. Her interest in boats started quite young with family Hydro races. Judy was an accomplished archer, placing highly in state competitions. Her bow had a 60lb draw! Judy was very strong, and anyone who shook her hand learned that instantly. Judy's mother was witness to Judy having saved a drowning girl in Torrance, California. Judy's all-time favorite song was, "Get Together," by The Youngbloods. Judy was loved by many and she will be dearly missed by all. Sailing truly brought Judy enjoyment and a sense of peace. I'm sure Judy is on the water now. Judy was preceded in death by her father, Gerald Frank Henry. She is survived by her loving husband of thirty years, Jack G. Cook; mother, Elaine Wilma Villwock-Henry; and three cats, Simon, Henry, and Fred. She was also survived by many family members: Linda Cronce, Jessica Cronce, David Villwock, Paul Villwock, Karen Wright, Joyce Nelson, Chris Nickols, Amanda Smith, Erich Villwock, Lori Denton, Brandon Denton, Whitney Gibson, Patty Pod, Shelby Pod, and in Colorado; Leon Henry, Todd Henry, and Mike Henry. Rest in peace my darling wife, daughter and friend to many.

On October 25, 2021, a beautiful human being by the name of Judith Christine Cook lost her battle with cancer. Judy was born Judith Christine Henry at the original Harrison Memorial Hospital on Chester in Bremerton, Washington. She was born... View Obituary & Service Information

The family of Judith Christine Cook created this Life Tributes page to make it easy to share your memories.