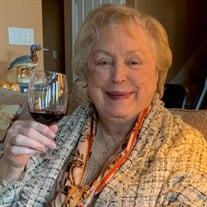 Judy had always been strong-willed and determined. And she wasn&#8217;t any less so about dying. She knew when it was her time, and she knew what she wanted. Judith Ann Winkler passed away on September 24th, 2021 at 11:46pm, after a beautiful... View Obituary & Service Information

The family of Judith Ann Winkler created this Life Tributes page to make it easy to share your memories.

Judy had always been strong-willed and determined. And she wasn’t...