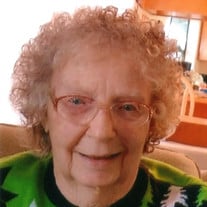 Juliet died on September 28, 2019 at Harrison Memorial Hospital in Bremerton, Washington. She was born in Washington D. C. to Frank A. and Mabel Frost on May 6, 1927. She was a graduate of Calvin Coolidge High School there and of Ohio Wesleyan University in Delaware, Ohio. She was a member of Alpha Xi Delta Sorority. She married Charles Richard Geyer on May 19, 1951 in Washington, D. C. She was employed by Eastern Airlines at Washington National Airport (now Reagan National Airport). They settled in Port Orchard, WA, in 1965. She was employed by the South Kitsap School District and was a member of Kitsap County School Retirees Association. She was predeceased by her parents, her husband, Charles, a sister, Jean Gable, a grandson, Jalynn McWhirt, a daughter-in-law, Sandy Anderson Geyer, and a sister-in-law, Norma Jean McGinnis. She is survived by a daughter, Julie Ann Barton, Redlands, CA, a son, Charles Richard Geyer, Jr., Sammamish, WA, a son, Frank Warren Geyer, of Forks, WA, a son, Ralph Wesley Geyer of the family home, 2 nieces, 2 nephews, 16 grandchildren, 26 great-grandchildren, and 2 great-great-grandchildren. At her request there will be no services. Memorial donations may be made to Ohio Wesleyan University (memo: Friends of the Libraries), University Advancement, 61 S Sandusky Street, Delaware, OH 43015 or a library of the donor’s choice. The above, as written by our mother, is a factual accounting of her life. However, it falls far short of defining who she really was. She was the best mother, grandmother and great-grandmother anyone could ever wish for. She was intelligent, an avid reader, kind and considerate to all she met, forgiving, generous to us all and to the dozens of charitable organizations she believed in, encouraging and supportive of all of our efforts and endeavors, loving and a true and loyal friend to everyone who touched her life. She will be dearly missed for a very long time by a very large number of people, most of all the four of us. Thank you, Mom, for everything. Julie, Chuck, Frank and Wes.

Juliet died on September 28, 2019 at Harrison Memorial Hospital in Bremerton, Washington. She was born in Washington D. C. to Frank A. and Mabel Frost on May 6, 1927. She was a graduate of Calvin Coolidge High School there and of Ohio Wesleyan... View Obituary & Service Information

The family of Juliet Frost Geyer created this Life Tributes page to make it easy to share your memories.