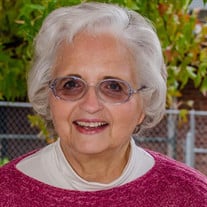 "Mrs. Nelson, Passionate Educator" Karen Ann (Vopalensky) Nelson 1945-2019 Port Orchard, WA Karen Ann (Vopalensky) Nelson, 73, passed away in Bremerton, WA on February 6, 2019 surrounded by her loving family. Karen was born September 15, 1945 to Joseph and Josephine Vopalensky in Portland, Oregon and is survived by husband Michael Nelson of Port Orchard, brothers Robert (Paulette) Vopalensky of Richland, Washington, Richard (Shirley) Vopalensky of Scappoose, Oregon and children Stephanie (Kevin) Burgess of Moses Lake, Janet (Chris) Lipton of Fayetteville, Georgia, Bob (Valerie) Nelson of Port Orchard, and Mary (Patrick Tan) Nelson of Woods Cross, Utah. She is also survived by brothers and sisters in-law Jim and Linda Nelson and Dick and Mary Niemeyer, grandchildren Danielle Hofstetter, Colton Hofstetter, Brandon Burgess, Jordan Burgess, Josie Lipton, Eric Nelson, Andrew Lipton, Isabella Burgess, great-grandchildren Aiden Burgess, Porter Hofstetter and Kennedy Hofstetter and numerous loving cousins, nieces, nephews, dear friends and colleagues. Karen grew up on a small family farm in Scappoose, Oregon. Her parents were first-generation immigrants from Poland and the Czech Republic. Karen’s family were among the founding members of St. Wenceslaus Catholic Church established for the large community of Czech immigrants in Scappoose. The family valued academics and music, Karen was chosen as valedictorian of her graduating class at Scappoose High School and was an avid musician who played the saxophone, accordion, guitar and piano. Karen attended Seattle University where she earned an undergraduate degree and later a master’s in Education. Karen was a passionate educator for over 50 years. She began her career as an elementary teacher in Fairfield, California. It was there that she met and fell in love with Mike, a handsome Army helicopter pilot, and his playful daughter, Stephanie. Karen and Mike were married in December, 1970. They moved with their infant daughter Janet from California to Port Orchard in 1974 to pursue Mike’s career as a civilian Army engineer. Children Bob and Mary were born in 1976 and 1978. As Karen and Mike’s children grew, Karen was inspired by the teachings of Dr. Maria Montessori and decided to resume her teaching career as a Montessori educator in South Kitsap. Karen got involved with her first Montessori School in 1980, and then in 1982 took over ownership, expanded the school's mission and named it Discovery Montessori. Discovery Montessori has been a South Kitsap institution for almost 40 years and has impacted thousands of students and families, and generations of community members. Under Karen's leadership the school was expanded from a one class preschool to a full elementary school serving preschool up to 8th grade. Annual enrollment has been as high as 150 students. Many of the school's alumni have sent their own children through the program and many have also served as a part of Discovery Montessori's outstanding support staff and teachers. To her students, colleagues, friends and neighbors she was always "Mrs. Nelson", a Montessori teacher and inspirational leader to the depth of her soul who guided others to personal mastery in all their endeavors by "helping me to do it myself". She encouraged all to view the world from many perspectives. Karen also served her community through involvement in her kids' and grandkids' schools and activities. She was a faithful and devout parishioner and youth educator at St. Gabriel Catholic Church. She had a deep curiosity and devotion to her faith. Friends and family called on her to pray in simple and profound circumstances. She was a mentor in faith for her friends and family and a seeker of ever greater understanding who encouraged others to do the same. A memorial mass for Karen will be held on Tuesday, February 19 at 2:30 pm at St. Gabriel Catholic Church in Port Orchard, Washington. Viewing is available before the mass on Tuesday from 1:30 to 2:30 in the St. Gabriel Chapel. In lieu of flowers, donations may be made to the Discovery Montessori Karen Nelson Scholarship Fund which has been established to help needy students pay for tuition. Donations made be made at any branch of Kitsap Bank, the school or by mail. Make checks payable to "Discovery Montessori Scholarship Fund". Kitsap Bank PO Box 1515 Port Orchard, WA 98366

The family of Karen Ann Nelson created this Life Tributes page to make it easy to share your memories.