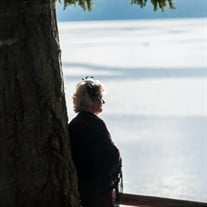 The family of Kathleen Alice Fuller created this Life Tributes page to make it easy to share your memories.

“You can take the girl out of the Bronx, but you can’t take the...