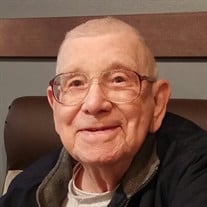 Kenneth Lawrence Borchers peacefully passed away at Harrison Medical Center, Bremerton, on July 26, 2017 at the age of 92. Ken was born April 17, 1925, in Maryville, Missouri to Ulysses S. Grant Borchers and Myrtle F. (Markwell) Borchers. The youngest of 14 children, moved with his parents as an infant to Aberdeen, Washington while his father worked building the breakwater. They soon moved to Bremerton and then to Port Orchard by the time he was 3. Ken attended South Kitsap High School and was active in several sports, including football and baseball, while working for Horluck Transportation on the Carlisle as a deck hand. At 17 years of age, he enlisted in the Navy and fought in both WWII and the Korean War. He was a signalman and member of the 1st Joint Assault Signal Company (JASSCO). Ken witnessed the raising of the American Flag on Mount Suribachi on Iwo Jima. After Ken’s discharge from the service in April of 1953, he returned home and met the love of his life, Herta, and they were married on October 31, 1953. Ken worked at Puget Sound Naval Shipyard as a shipfitter, and retired as a naval architect technician in 1976. Ken was extremely interested in following sports, from South Kitsap football, to the UW football and basketball teams, to the Mariners, Seahawks, and Sonics. He always watched when he could or at least followed what happened in the daily paper. And he was quick to share his opinion on how to fix what was going wrong with the teams. Ken also loved to bowl and spent many years down at Hi-Joy Bowl. In their later years, Ken and Herta were regulars at the restaurant and became like family. But no matter where Ken ate, he always had a cup of black coffee to go with it, the stronger the better. Ken was always quite the joker and tried to make people smile. He would say, “If you can’t have fun, what’s the sense?” Ken and Herta were married for 58 years. He was devastated when Herta was diagnosed with Alzheimer’s and eventually passed away in June of 2013. Ken enjoyed reading westerns, and mystery novels, and exploring for information and photographs of WWII on the internet. If there wasn’t a football or baseball game on television, an old western movie would do. He didn’t mingle as much as he used to because his hearing was so bad, but he still made some wonderful friends at Stafford Suites, where he resided. He loved having lunch with Bill and Al and they all took turns giving each other a hard time. Ken leaves behind sons Larry Moffitt (Joyce) of Vancouver, Bob Meyer of Port Orchard, Brian Borchers (Trish) of Moscow, ID, daughter Pam Fillmon (Bruce) of Bremerton, and daughter-in-law Debbie Borchers of Orting, seven grandchildren and numerous great-grandchildren. He is preceded in death by his wife Herta, and his son, Steve Borchers. We wish to thank Stafford Suites for their wonderful, loving, compassionate, and dedicated staff that took such great care of Ken. In your care, he was very happy. Internment will take place on August 15, at 1:00 pm, at Sunset Lane Memorial Park, located at Mile Hill – Bethel Avenue Roundabout, Port Orchard. Immediately following, a reception will be held at Stafford Suites, Port Orchard Room, located at 1761 Pottery Avenue, Port Orchard. Please visit Rill.com to share stories and leave messages.

The family of Kenneth Lawrence Borchers created this Life Tributes page to make it easy to share your memories.