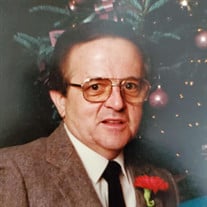 Kenneth Harry Brock was born on August 24, 1934 and grew up in Puyallup, Wa. He attended Puyallup High School (class of ‘52), Seattle Pacific University and University of Washington School of Pharmacy. Before he became a Pharmacist, he was an owner of a Dairy Queen and then was a Pharmacist for 35+ years for B&B Drug (Owner), Bonanza 88, Roseaurs, and then Safeway, where he retired. His most significant accomplishments were his graduation from the University of Washington, His Puyallup City League No Hitter, and providing for his family. He was a member of UW Alumni and a Vintiques Car Club member since 1976. Some of our fondest memories include him playing the Saxophone, Camping trips with family, Rod-Runs, Restoring a 31 Chevrolet 4dr Sedan Dlx Street rod, Christmas lights at 705 Crescent and his landscaping. His favorite things to do were attending the Grandkids sports, camping/traveling to Hawaii and Rod Runs. He enjoyed Classic Cars, was a fan of Seattle sports including the Seahawks, Mariners and Sonics and was an avid Photographer. His favorite places were Hawaii and Puyallup. Some of his collections included a No Hitter Baseball, his Saxophone, Abbott & Costello “Who’s on First” animated display, all his memories. He enjoyed Rhododendrons and his favorite colors were influenced by his Sports interests - Purple & Gold! Plus Seahawk Blue. His music tastes leaned towards all 50’s and Jazz Bands especially Benny Goodman. He also enjoyed the sounds of Kenny G. Ken was preceded in death by his wife Doris, Parents Merle & Barbara, Brother Wayne “Buck”, his grandson Brian, and his dog Dinky. He is survived by his Daughter Kristi Jongsma and husband Jerry with children Ashley (husband Dan), Jared (Ansley), Matthew, Kaylynn (Marco), & Taylor; Son Blaine Brock and wife Renee with children Nathan (wife Sara), Kenny, and Dylan; and Son Guy Brock with child Aimee. As well as five great grandchildren. And dog friend ODIE. In lieu of flowers, donations can be made to either the American Macular Degeneration Foundation (AMDF) or Alzheimer’s Association

Kenneth Harry Brock was born on August 24, 1934 and grew up in Puyallup, Wa. He attended Puyallup High School (class of &#8216;52), Seattle Pacific University and University of Washington School of Pharmacy. Before he became a Pharmacist,... View Obituary & Service Information

The family of Kenneth Harry Brock created this Life Tributes page to make it easy to share your memories.