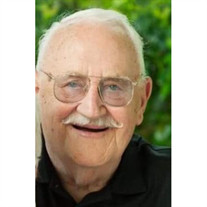 Kenneth Dwight Kliewer was born January 26, 1930, in Newport, Washington. He was the youngest of nine children born to Frank and Katherine Kliewer. He was raised on a small farm in Spring Valley, a community of General Conference Mennonites during the depression. Life was difficult, but Ken had all the adventures of a boy growing up on a farm with six older sisters and two older brothers. Ken’s Mother died of cancer when he was sixteen. He managed to graduate from high school and, after spending a winter working in the local sawmill, decided that he needed to go to college. He worked his way through Bethel College in Newton, Kansas, and graduated with a Bachelor of Arts degree. The Korean “police action” was happening at that time, so he enlisted in the Navy and went to the Navy Photo School at NAS Pensacola, Florida. He ran camera banks in a Navy variant of the B24 Liberator, spending his summers in Alaska and his winters in San Diego on aerial mapping missions. Ken was deploying to Panama when his airplane clipped a tree in the landing pattern and cartwheeled into the jungle. Ken was thrown clear as the aircraft came apart, but he returned to the burning wreckage to pull three fellow crew members to safety, two of whom survived. At that point, he collapsed from severe injuries, including broken vertebrae in his back from impacting a palm tree on the way to the ground when he was separated from the aircraft in flight. Ken was one of seven survivors out of a crew of 14. Because of his actions, he was awarded the Navy and Marine Corps Medal for heroism, the highest non-combat award for valor at the time. As a result of his injuries, he was honorably discharged from Naval Service in September of 1954. After leaving the Navy, Ken then went to Northrop Institute of Technology in California and earned his Bachelor of Science in Aeronautical Engineering. He was not about to let the crash ruin his love of flying, so he learned to fly and obtained his pilot’s license. After school, he went to work on cooling systems on the Titan Missile Program. In 1961, while visiting his sister in McCall, Idaho, he met and married his wife, Dixie. They stayed with the Missile Program until the eldest child came along and they decided it was not a lifestyle in which to raise a family. They bought their first house in Coeur d’ Alene, Idaho, and Ken worked for Kaiser Aluminum. After four more years and two more children, he accepted a position as a Nuclear Engineer at the Naval Shipyard in Bremerton, Washington. He retired in 1990 after 23 years of civil service. Ken was a man of many interests. He loved motorcycles and rode one when he was younger. He always loved airplanes, and could tell you what type of plane was flying over just by the sound of the engine. He sang Barbershop and performed with a group in Spokane, then later with a group in Seattle. He played baseball with a league in the shipyard. He worked with his kids in little league baseball and soccer. He built an addition onto the family home, adding a fourth bedroom and giving his children a large rec room in which to entertain their friends. He joined the Port Orchard Masonic Lodge #98 and went on to become a Scottish Rite and a member of the Nile Shrine. He continued with the Blue Lodge, going through the chairs and becoming a Past Master of the Port Orchard Lodge. He worked for many years as a degree coach. He worked with the youth bodies, both DeMolay with his sons Kevin and Kyle as well as Job’s Daughters with his daughter Kellie. After he retired from the Shipyard in 1990, he took on many new hobbies. He repaired clocks, did lots of wood working and made several works of art that he loved to share with his friends and relatives. He did lots of traveling and enjoyed attending his Navy Squadron reunions all over the United States. He was one of three left from his Squadron when he passed. Ken loved all his family and friends. They all gave him great pleasure. Ken’s cup was always half full. He always saw the best in everyone and he always turned the other cheek. Wouldn’t the world be a wonderful place if we could all be this way? Thank you so much for coming today to help us celebrate the life of this wonderful man. His wish was that no one mourn him, but instead to toast him with good memories.

Kenneth Dwight Kliewer was born January 26, 1930, in Newport, Washington. He was the youngest of nine children born to Frank and Katherine Kliewer. He was raised on a small farm in Spring Valley, a community of General Conference Mennonites... View Obituary & Service Information

The family of Kenneth Dwight Kliewer created this Life Tributes page to make it easy to share your memories.