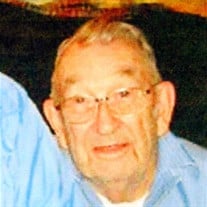 Kenneth Russell Woodrow October 12, 1928- March 11, 2017 Kenneth was born in Aurora, Illinois on October 12, 1928. He was born to Lewis and Edith Martin Woodrow. Kenneth served in the Army from December 11, 1950 to December 1 1952. He did his basic training at Fort Leonard in Wood, MO. He then went to Korea and was an engineer in construction and he was a driver. When he got out he found out that his mom had moved to Idaho. Kenneth was a member of the Church of Christ in Twin Falls, Idaho. He had one of the ladies from church introduced him to Patricia Lee Morris and they were married on November 17, 1957. Ken worked at Texaco service station. He then went on from there and went to Sears and worked in the service station and then he went to the warehouse and he did deliveries and he managed the warehouse. Ken was involved in the Church and he drove the Joy bus. He did a lot of reading his bible and listening to classical music. He liked to play computer games and do word search. Ken was a big hugger he would greet people at the door. He would ask people if they hugged and then he would give them a hug if they did. He then went on to attend the Church of Christ in Gooding, Idaho. In 1988 Ken had stomach cancer and he had always said God was not finished with him yet. Ken and Pat moved to Port Orchard, Washington and they attended the Port Orchard Church of Christ. He helped with the MOPS program which he took care of children for the mothers so they could attend a class. He helped by laminating class material and cutting it out for the teachers. He also helped with celebrate Jesus with sewing clothes and helping in the kitchen and doing the lord’s supper scene. He did these things till he could not do them anymore. He was a big influence on young people’s lives. He was loved by all who knew him and he will be missed. Ken is survived by his wife Patricia L. Woodrow. His half-brother-in-law Carl Morris His daughter Pamela Kay Woodrow. His son Renny L. Woodrow and his wife Darlene. He also had some adopted children that thought of him as their dad. Diana and her husband Scott Woodrow. He has six grandchildren. Roseana Hinds(Brandon), Dylon Woodrow, Matthew Woodrow, and Shaleena Woodrow, Amanda Nadeau, and Garrett Nadeau and various people that thought of him as a grandpa. He had 3 great grandchildren Malachi, Ammon Hinds and Sariah Hinds. Ken’s parents Lewis Clark Woodrow and Edith Martin Woodrow have already passed away. His Half-Brothers Charles Conway and Harold Conway and Bob Woodrow, his half-sisters Margaret Brennecke and Elizabeth Seiford and a brother-in-law Doyle D Morris and others that we do not know about and various friends and church members. He will truly be missed and everyone will miss his hugs. His daughter Pam will miss taking him with her to places and going out to eat. There is a memorial service at the Church of Christ in Port Orchard on March 25, 2017 at 2pm. Everyone is welcome to come Cards can be sent to the mailing address The Woodrow family 1250 S E Carl Pickel Dr Port Orchard, WA 98366 Church of Christ 2585 Carr Lane S E Port Orchard, WA 98366

The family of Kenneth Russell Woodrow created this Life Tributes page to make it easy to share your memories.