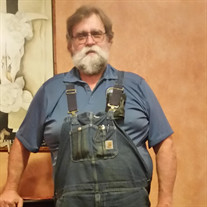 Kip, affectionately known as Jim, was born on November 21, 1955 to Toby and Shirley (Wilson) Vasbinder in Sumpter, South Carolina. He was a gentle giant. that loved his family and did everything in his power to make our lives great. He always put his family above everything else. After high school, Jim served in the Navy for 5 years as a Seabee (Construction Battalion) and then worked in Shipyard. While in the yard, he received many Achievement Awards. He was proud of being a Rigger. Riggers thought they ran the shipyard, and all you had to do to test that theory was try to get too bossy with them. That’s when you found out the hard way that how difficult it is to get things done without them. His first date with Kathy was Dec. 31st, 1977. He took her to an all you could eat buffet and all the Champaign you wanted. That night right after midnight he wanted to go for a walk on the beach because all the rich seafood/Champaign was a bit much. While we were out on the beach we sat on a log and he put his arm around me and said "I'm going to marry you" She cracked up laughing and said, yeah right, you are really drunk and I'm going to drive you home. 6 weeks later, they got married! That was February 17, 1978. He was still in the Navy and they chose that date because it was payday and they just didn’t have a ton of money, but they did prove that sometimes love at first sight does work. He was a very committed and loyal man, the best man at their wedding was LeRoy. He called LeRoy his brother from another mother and would call him every Sunday night. On one particular camping trip with LeRoy and his wife at the time Dianna, Kip and LeRoy thought it would be fun to go 'skinny dipping'. Well, the girls were not into icy cold water and passed on the adventure. BUT, they did go and grab their clothes so they would be 'exposed' when they got out. They begged for their clothes for 10 minutes before they had mercy on them and threw them towels. Kathy is pretty sure neither of them 'skinny dipped' again! Kip loved their children. He would do anything within his power for them. He loved to taking Kathy to the ocean and he would go through thrift shops etc. to find her 'all things Dutch'. He loved to surprise her with wooden shoes, or all kinds of chickens for my collection. He always put his family above his needs. He loved to go camping with family. His Uncle Jack and Uncle Bob planned a river float? I guess you would call it. They all wore wet suits and floated down the river. He never stopped talking about how much fun it was.     Kip LOVED movies and football. No matter how many times he'd seen a movie, he'd watch it again. He also enjoyed hunting, fishing and anything outdoors. But his absolute favorite thing was raising his children and being together with his family. Kind of along the lines of his affinity for movies was his favorite song by George Strait "I cross my heart" he would NEVER pass up watching the movie, and when it came to this song, he would pause the TV and yell, "Woman, get in here." I'd come in and ask him what was up and he'd start the song. They'd dance right there in the living room, even though he had NO RYTHYM!!!!! Years ago she tried to count out the rhythm, but gave up on that like 20 years ago and just followed his lead. Perhaps the easiest lace to find him around the house was in his recliner. Kip was a 'cliner monster' He loved time in his 'cliner' He also loved his pets and maybe his favorite was Chewbaccasan (son of Chewbacca) A Shiatzu they had for over 14 years. The problem was Chewie didn't know he was a dog, he thought he was the family’s baby!!! Last summer a beautiful black kitty showed up in the garage, on my laundry table on top of a pile of freshly folded laundry. Kathy looked at the kitty, thinking she would scare it away and said "what are YOU doing here" she looked back at her as if to say, "this is MY laundry...what are YOU doing here" Miss Kitty came back over and over and several months ago became a permanent member of our family. She LOVED da Wookie because he would feed her chicken. After a series of heart attacks that seemed to resemble a bad flu, Jim’s body gave up the fight on December 30th. When he died, before the coroner came, Miss Kitty curled up against his body. We both miss him very much and he will be greatly missed by those who knew and loved him.

Kip, affectionately known as Jim, was born on November 21, 1955 to Toby and Shirley (Wilson) Vasbinder in Sumpter, South Carolina. He was a gentle giant. that loved his family and did everything in his power to make our lives great. He always... View Obituary & Service Information

The family of Kip James Vasbinder created this Life Tributes page to make it easy to share your memories.