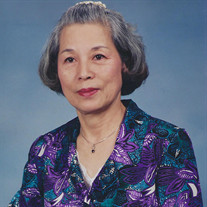 Kunie Sakamoto Goudy loving mother, grandmother and close friend to many, passed away peacefully in the early hours of June 28, 2019 after a sudden illness. She was born on October 20, 1934 in Chiryu City, Aichi, Japan to Ichinosuke and Taji Sakamoto. Kunie was youngest of four children. After high school she attended Dress Maker school, worked at Marue Department Store and at a U.S. Airforce base officer’s club in Nagoya, Japan. It was there, she met her first her husband, Sylvester Owen Bean with whom she had three children: Roy, Ernest and Susan. Kunie came to the United States in the spring of 1962 and moved to Malmstrom Air Force Base near Great Falls, Montana. In September 1964, her husband passed away suddenly and she relocated to Billings, MT. Kunie eventually remarried Gordon Goudy in August 1965 and her family grew to include son David and daughter Virginia. The family moved from Montana to Okinawa to Spokane back to Montana and finally settled in Port Orchard, WA in 1971. During her time in Port Orchard, her favorite place in the whole world as she so often said, she was a member of the Peninsula Japanese Woman Club. As a member, she performed traditional Japanese dance, participated in local festival and parades for which the group won many trophies and awards, and took part in many other community and school events sharing the Japanese culture. Another of her favorite pastimes was singing. She performed throughout the Puget Sound area with the Uguisu Kai choral singing group. At the age of 69, she began practicing Goju-Ryu Karate at Sorano Karate School. She studied for several years attending an international seminar in Canada and participating in many local demonstrations with her children and grandchildren. Other favorite hobbies of hers included: gardening, origami, watching Korean dramas, singing karaoke, cooking, sewing, Ikebana, mushroom hunting, and bowling. Kunie was preceded by husbands Sylvester Owen in 1964 and Gordon in 2011, her brother Uhei, and her sister Misako. She is survived by her dog, Lily; sons David, Roy (Yukari) and Ernest; daughters Susan (Megumi) and Virginia (Gary); grandchildren Daniel, Jennifer (Dan) and Christopher; brother Yasuo (Tsuyako); and many in-laws, nieces and nephews. Service information is below. Dress code is casual & comfortable.

Kunie Sakamoto Goudy loving mother, grandmother and close friend to many, passed away peacefully in the early hours of June 28, 2019 after a sudden illness. She was born on October 20, 1934 in Chiryu City, Aichi, Japan to Ichinosuke and Taji... View Obituary & Service Information

The family of Kunie S Goudy created this Life Tributes page to make it easy to share your memories.