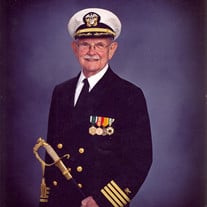 Larry Gene Gudbranson (Capt. USN Retired ) of Manchester, WA passed away June 7, 2017 in Gig Harbor, WA. Larry was born August 12, 1929 and grew up in Bellingham, WA. He graduated from Bellingham High School and earned his degree (BS Economics) from the college which is now known as Western Washington University. It gave him a sense of pride that his son, Brian, and granddaughter, Brianne, followed in his footsteps and also received diplomas from Western Washington University. Larry entered the United States Navy and served proudly as a supply officer. His service included two tours of duty in Vietnam. Captain Gudbranson retired from the Navy in 1976. He maintained a lifetime membership in the Military Officers Association of America (MOAA ). Larry moved to Manchester in 1977 where he resided with his wife of 49 years, Lora. She passed away in 2000. Larry was a craftsman, he built his boat “Haida”, an Annapolis 44ft sailboat. He pulled this off in his backyard, by himself from a bare hull. The completion of the project and the joy he got from sailing “Haida” were some of his proudest accomplishments. He was a skilled and avid sailor and a former member of the Port Orchard Yacht Club. He enjoyed sailing “Haida” with Lora, during a myriad of expeditions through the San Juan Islands and forays into Canadian waters the highlight of which was a circumnavigation of Vancouver Island. Later in life, Larry enjoyed road trips to places such as California, Utah and the Grand Canyon as well as cruise ship tours to Hawaii, Alaska and through the Panama Canal with his companion, Lydia Gowing. Larry very much appreciated the care, comfort and compassion Hospice workers provided to Lora before her passing. He demonstrated that gratefulness by becoming a volunteer with Hospice of Kitsap County. He was an active member of Harper Evangelical Free Church. He accepted the Lord, was baptized and reborn at the “young” age of 86. Larry enjoyed exercise and he maintained an active lifestyle which was comprised of gardening, yardwork and physical fitness. He made it a habit most mornings to visit the Olympic Fitness Center where he routinely worked out, regaled all with his stories, and appreciated the camaraderie of his regular group of associates. Captain Gudbranson is survived by his son Brian Gudbranson, his daughter Lori Haggerty and her husband Steve, his granddaughter Brianne, as well as his brothers Bruce and Denny Gudbranson and cousin Joanne Roberts. A memorial service will be held 1:30pm Tuesday June 27 at Rill Chapel in Port Orchard. The service will be followed by a celebration of his life at the Swimdeck Restaurant 3:00pm. Memorials may be made to: Wounded Warrior Project PO Box 758516 Topeka, Kansas 66675. www.woundedwarriorproject.org

The family of Larry Gene Gudbranson created this Life Tributes page to make it easy to share your memories.