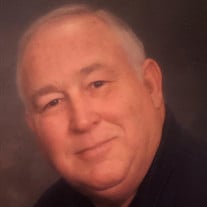 On Wednesday, October 2nd, 2019, Larry Joe Nunley passed away in Eagle, Idaho at the age of 73. Larry was born in Oklahoma City, Oklahoma on July 25th, 1946 to Claude Boomer Nunley and Inez Ellen Donnell Nunley. He was born the third of four children who grew up on a farm in Midwest City, Oklahoma and loved telling stories about his youth, his siblings and his pony, Red. After graduating from high school he enlisted in the Navy and was stationed in Bremerton, Washington where he met and married his wife, Margaret (Peg) Ann Richardson. Larry served two tours in Vietnam on the super carrier USS Ranger (CV-4) and the Bon Homme Richard (CV/CVA-31) from 1965-1969. Larry and Peg were married September 23, 1967 in Bremerton, Washington. Together they raised a daughter, Cynthia, and son, Larry Joe II (Joe). After discharge from the navy, he spent a short time driving a school bus for South Kitsap School District and did some other odd jobs before beginning his career. Larry volunteered for South Kitsap Fire and Rescue before becoming a firefighter at Puget Sound Naval Shipyard. He joined PSNS in 1978. He was an EMT and tillerman operating the big fire truck with the big ladder on the back. He worked hard to earn the position of fire captain. He retired in March of 1999. After retiring, he spent time driving disabled and elderly people to appointments and worked some other odd jobs. Larry spent his life in service to others. He loved his family and friends and was always willing to lend a hand to anyone in need. He enjoyed antique cars, the Seahawks and rooting on the WSU Cougars. Larry is survived by his wife and children as well as six grandchildren, Tabitha, Nick, Noah, Ellie, CJ, and Will Nunley, his brother-in-law and best friend, Charles O’dell, sister Janice O’dell, brother Richard Lee and sister Claudia. He also leaves behind his friend of more than 50 years, Jim Degnan, and his beloved dog, Bella. In lieu of flowers, the family requests donations to Firefighter Cancer Support Network. https://firefightercancersupport.org/

On Wednesday, October 2nd, 2019, Larry Joe Nunley passed away in Eagle, Idaho at the age of 73. Larry was born in Oklahoma City, Oklahoma on July 25th, 1946 to Claude Boomer Nunley and Inez Ellen Donnell Nunley. He was born the third of four... View Obituary & Service Information

The family of Larry Joe Nunley created this Life Tributes page to make it easy to share your memories.