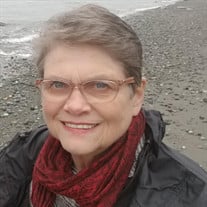 Laurine Ida Homestead was born February 10th, 1938 to Myrtle and Eric Moilanen. She and her older sister Loretta grew up in Fauntleroy. Laurine always spoke fondly of her childhood and specifically, the many bike rides she took to Lincoln park to swim and other fun excursions her bike would take her to in West Seattle. And, let’s remember as she would often remind us, she pedaled fiercely because the bike only had one speed! Laurine attended West Seattle High School where she was a “song leader” and graduated early at age 17 due to previously skipping a grade in elementary school. She was known for her smile which led to being named a West Seattle Hi-Yu Princess & Seafair Princess in 1955 as well as Miss Thrift in 1957. We had no idea what being Miss Thrift meant as kids but it sure sounded impressive. She attended the University of Washington for one year joining the Delta Delta Delta sorority while working at Frederick & Nelson’s and commuting from home. Wayne and Laurine married in 1957 and had three children Michael, Cheryl & Carolyn ultimately, settling in Normandy Park in 1968 where she would reside for the remainder of her life. As a mom, Laurine ran the household and was a true 60’s and 70’s mom. Lots of freedom was given in a typical summer day and often she could be heard calling us home at dusk out the backside of the house. She ran a tight ship and she had to as she headed back to work in the banking business in the 70’s. She loved being back to work at first part-time and eventually full-time. She was so excited when she accepted a position downtown and began riding the bus. It was comical to witness her exit strategy of getting out of the house and beating the bus to the park and ride. She made it on most occasions! Laurine was a lifer when it came to friendships and she loved sending cards whether it be to high school friends, grandchildren or her children’s friends children. It gave her great pleasure to wish someone a happy birthday or holiday wish. Often, she would tell us she was home “doing cards” and recently, this was the case for Valentine’s Day. We thought well, that shouldn’t take too long, so we often wondered what else she do in a day. This was asked having no idea “doing cards” meant 22 cards! Needless to say, if a greeting card was ever needed, Laurine would be able to find just the perfect card in her own personal card shop. Not everything went as planned for Laurine but her Finnish and Norwegian roots always pulled her through tough times and she was the stabilizing rock of the family. She was reliable, thoughtful and after learning to text, we learned she was quite witty. Grandma Laurine was extremely proud of her grandchildren and would tell her relatives and friends about their many accomplishments over the years. They knew their time with grandma, was time well spent. From crafting, playing frisbee and going to Disneyland, she did it all with them. Welcoming great grandchildren in recent years gave her joy. It also gave her a reason to head to the second-hand stores – one of her favorite hobbies. She loved a great find and on at least one occasion she repurchased her own donations! Laurine turned 80 last February and hated the sound of it – she said it sounded old. We didn’t think much of it because she always looked younger than her years. To celebrate, she traveled to Washington D.C. for the first time in her life. After seeing Mount Vernon, Cheryl asked what did you think “well, I’ve been in farm houses before.” She wasn’t able to say that after seeing all the monuments – she was impressed! Like all 80 year-olds, she requested to see the Jersey shore while back east :) Cape May proved to be the highlight between DC & NY. It truly was a trip of a lifetime for her and it was just a month ago. Her passing was unexpected and has saddened us all; but, life moves forward. And, she knew that. She loved her home and was able to spend her last day in it. She loved her family, relatives and friends and they all knew it. More importantly, we LOVED Mom, Grandma, Great Grandma, Aunt, cousin and friend and she knew it :)

Laurine Ida Homestead was born February 10th, 1938 to Myrtle and Eric Moilanen. She and her older sister Loretta grew up in Fauntleroy. Laurine always spoke fondly of her childhood and specifically, the many bike rides she took to Lincoln... View Obituary & Service Information

The family of Laurine Ida (Moilanen) Homestead created this Life Tributes page to make it easy to share your memories.