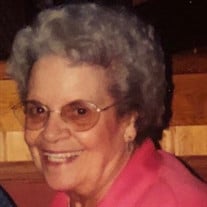 Lavina Geneva McIntyre, 94, a longtime resident of Port Orchard passed away March 29, 2019 at Harrison Hospital in Bremerton. Lavina was born November 17, 1924 in Seattle to Robert and Helen (Gauna) Hill. The family moved to Port Orchard when she was very young. Her entire schooling was in Port Orchard. She graduated from South Kitsap High School in 1943. Her best friend Priscila (Morgan) Paradis introduced her to Robert McIntyre in 1947. He proposed on Christmas and they were married in Port Orchard on January 25, 1948. Her dream of being a mom was fulfilled with the birth of daughters Kathleen and Deborah (Debbie). She was devoted to her children and all their activities. Summer camping trips and razor clam digging gave her such happiness. Her love of children continued with the birth of her granddaughters and four great-grandchildren. She was an avid Mariners and Seahawks fan. She had a lifelong love for animals. Her cake decorating skills were like no others! She was predeceased by her parents, husband Robert (Bob), brother Robert (Bobby) Hill, sister Leona Morrison, granddaughter Kelli Chittenden, and her three special friends, Priscilla Paradis, Joan Orser, and Verna Jackson. She is survived by daughters Debbie Yapachino and Kathleen Chittenden, granddaughters Erica Morse and Jamie Chittenden, great grandchildren Anthony Morse, Kylee Morse, Kiara Valdez and Ryan Barrientos and numerous nieces and nephews. She held a special place in her heart for all her furry four-legged “grandchildren”. In lieu of flowers, remembrances’ can be made to the Kitsap Humane Society, 9167 Dickey Road NW, Silverdale, WA. 98383, St. Jude’s (I.D.11601296), P.O. Box 1000 Dept.142, Memphis, TN. 38148 or a charity of your choice.

The family of Lavina Geneva McIntyre created this Life Tributes page to make it easy to share your memories.