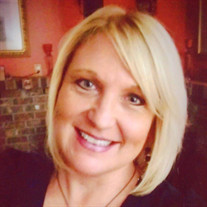 Leann was born October 7, 1975 to in Oakland, California, the third daughter of Arlond and Theresa Goodwin. The family later moved back to Port Orchard where Leann attended schools at East Port Orchard Elementary, Marcus Whitman and John Sedgwick Middle Schools, and graduated from South Kitsap High School in 1994. She married Scott Simpson Aug 4, 2001 but they later divorced in 2011. They remained great friends & together raised 2 incredible children Skyler & Kenadee. She worked as a Medical Technician at Doctor’s Clinic in Port Orchard, and CHI Franciscan St. Anthony’s in Gig Harbor. She was a people person and enjoyed helping everyone so that profession was a good fit for her. She was very gregarious and did have an opinion and you usually didn’t have to request it. The good news is that friend or foe, you never had to second guess where you stood with her. Raising her children, son Skyler and daughter Kenadee, was among her greatest accomplishments. She was enormously proud of her children. She genuinely enjoyed being with her kids and extended family. Leann liked to go camping at places like Potholes in Eastern Washington, and on the Skokomish River. While she did enjoy camping, her favorite place to be was at home with family and friends just having fun or even just hanging out. Other favorite things were dancing, beading jewelry, yellow roses, her pets, Pumpkin the cat and Minnie the dog. Her favorite color was pink. She also enjoyed singing anywhere with music and especially singing Karaoke. She just did her best to live a full life. She died at her home in Port Orchard after a lengthy illness and was surrounded by loved ones. She was preceded in death by her mom, Theresa, sister Lisa, grandparents Tony and Fern Winter, grandma Helen Bracamontes, uncle Elton Goodwin and her companion Cliff Stookey. Leann is survived by her father, Arlond Goodwin and bonus mom Sharon, children Skyler & Kenadee Simpson, former spouse Scott Simpson, sister Lynae Goodwin, brothers Derek Rae & Joshua Sewell, grandfather Sonny Bracamontes numerous aunts, uncles, cousins, and best friend & cousin Brooke Porter along with a multitude of friends. She will be dearly missed by all who knew and loved her. Ceremonies will be private but a live webcast will be shown on this site 11am December 5th.

The family of Leann Marie Simpson created this Life Tributes page to make it easy to share your memories.