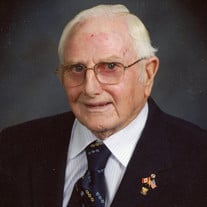 On April 2, 2019, Lee Francis Caldwell at the age of 97 passed away peacefully. He was born to Vernie B. and Ellen Cullen Caldwell in Seattle, Washington on December 8, 1921. He was followed by sisters, Anna and Katherine. The family resided in Steilacoom, Washington until 1930 when they moved to Tacoma, where his parents owned and operated a grocery store until 1934. In early 1935 they relocated to Bremerton and in April of 1936, they purchased the J.P Joslin Second Hand Store in Port Orchard, and renamed it, Caldwell Trading Post. In the summer of 1936, they moved to Port Orchard. A brother, John, was added to the family in 1939. Lee graduated from South Kitsap High School in June of 1941 and entered the Puget Sound Naval Shipyard in February of 1942 to serve an apprenticeship as a boat builder, which he completed prior to entering the Navy. He joined the Navy in 1943 as a Carpenter’s Mate 3rd Class. Upon discharge from the Navy in Bremerton in 1946, he began working in his father’s business, then named Caldwell Trading Post and Transfer. He worked for his father at the store until he purchased the business in January, 1960. He continued to run the store until 1982, as well as starting and operating Caldwell Rental Mart at the bottom of Mile Hill, form 1970 to 1975. Lee married Doris L. Davis of Monroe, Washington on August 18, 1943 at Star of the Sea Catholic Church in Bremerton. He was preceded in death by his wife, Doris, in 2008, and his youngest daughter, Ellamae Dooley, in 2014. Lee is survived by three daughters, Gaylynn (Don) Broga, Francine (Robert – deceased) McKinley, Dorilee Shobert (David Berry); his siblings, Anna Ghormley, Katherine Leonard and John Caldwell; five grandchildren (Kathleen Dunn, H. David McDermott, Leslie McKinley, Tim and Kevin Broga), eight great-grandchildren, one great-great grandchild, and numerous nieces and nephews. Lee joined the Port Orchard Volunteer Fire Department in 1946 and was appointed Assistant Fire Chief in 1957. He held that position until 1972 when he was elected to the Port Orchard City Council. He resigned as Assistant Fire Chief, but continued as a volunteer fireman until his retirement after 37 years. As a city councilman, Lee was instrumental, as chairman of the Streets and Alleys Committee, in setting up the first public meetings on the Port Orchard (Blackjack) Bypass, which was vital to the survival of the downtown business area in relieving tremendous traffic loads on Bay Street in downtown Port Orchard. He also served on the Water and Sewer Committee for many years. In 1980 he was selected as “Mayor Pro Tem” and remained in that position until 1983 when he was appointed Mayor by the city council. In 1984 Lee was elected as a Commissioner for Public Utility District #1, a position he continued to hold for 28 years, retiring in 2012, at the age of 91. In the late 1980’s he was selected as the South Kitsap Chamber of Commerce Man of the Year. Throughout his life Lee has been a member, and often an officer, of numerous other organizations including: Knights of Columbus 3rd and 4th Degree, more than 80 years; American Legion Post #30, more than 70 years; Bremerton Elks #1181, 40 years; St. Gabriel Catholic Church, 76 years; Fraternal Order of Eagles #2338, 45 years; Board member, US Navy League; Kitsap County Law Enforcement and Firefighters Retirement Board; Board member, Port Orchard Improvement Corporation; Local Past President and District Governor, Active Club International; Past President and Board member, Kitsap Humane Society; Past President, Kitsap-Mason County Firefighter Association. Lee enjoyed attending PUD meetings, traveling around the country, spending time at Ocean Shores, and visiting old friends, while escorting and providing transportation for his many “lady friends” to senior activities. He enjoyed eating at the Airport Diner and Uncle Dave’s Café. His hobbies included collecting stamps, marbles, rocks, model boats and cars, eagle figurines and woodworking tools, which he used to regularly remodel the family home. We would like to thank the Family First Adult Homes, especially the staff at Olalla Home for their compassionate care and understanding of our father during his last months. Services will be held on Saturday, April 13, 2019 at St. Gabriel’s Catholic Church, 1150 Mitchell Avenue in Port Orchard. Rosary will be at 10:30 A.M., and a funeral mass will be celebrated at 11:00 A.M. with a reception following. In lieu of flowers, donations can be made to a charity of your choice. Inurnment with Military Honors will be held at a later date at Sunset Lane Cemetery in Port Orchard.

On April 2, 2019, Lee Francis Caldwell at the age of 97 passed away peacefully. He was born to Vernie B. and Ellen Cullen Caldwell in Seattle, Washington on December 8, 1921. He was followed by sisters, Anna and Katherine. The family resided... View Obituary & Service Information

The family of Lee Francis Caldwell created this Life Tributes page to make it easy to share your memories.