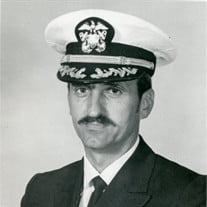 Leonard Ray Womack, age 86 Ray Womack was the middle son of five children, born December 15, 1930 to Dallas Womack and Clara (Warner) Womack in Fairview, OK. Ray entered the arms of his Heavenly Father on October 28, 2017. Ray was raised during the depression, and in his early teens, the family moved to Oklahoma City where his dad worked on repairing planes for the WWII effort. Ray graduated from Fairview high School and went on to obtain his Bachelor of Science degree from Oklahoma State University. Ray then served for 30 years as a Naval Officer and was a veteran of the Korean and Vietnam wars. Ray married Shirley (Robertson) September 21, 1952 in Fairview, OK. He had four children and traveled extensively in the Navy with his last assignments as the Commander of the Defense Communications Agency in Clark AF Base, Philippines, and finally his last tour was to the Pentagon, when he retired in 1978. In his retirement, he built his dream home, and continued working as a relief Captain for the UW aboard the Thomas G. Thompson. He was an active member of Christ the Rock Community Church, Serving as their landscaping custodian, and conducting bible studies in his home. Ray was an extremely patient and generous man who advocated for pro-life ministries. He had accepted Christ as his savior and began his walk of faith. Ray understood the price of freedom in this country and always wanted to instill that in his grandchildren. Ray loved his brothers and sisters and spent as much time with them as he could. Ray enjoyed the outdoors, especially the sea. His favorite poem was Alfred Tennyson’s. “Crossing the Bar” Sunset and evening star, And one clear call for me! And may there be no moaning of the bar, When I put out to sea, But such a tide as moving seems asleep, Too full for sound and foam, When that which drew from out the boundless deep Turns again home. Twilight and evening bell, And after that the dark! And may there be no sadness of farewell When I embark; For tho’ from out our bourne of Time and Place The flood may bear me far, I hope to see my Pilot face to face When I have crost the bar Ray is proceeded by his parents, Dallas and Clara Womack, brothers; Willis, and Vernon Womack, and son, Tom Womack. Ray leaves behind; his wife, Shirley, and family; Chris Womack, Suzie Pride, Melissa Mills, Terri Bayless, Connie Womack, Darin Mills, Brad Pride, eleven grandchildren, and one great granddaughter. Sisters; Von (Jerry) Williams, and Vada Major and numerous nieces and nephews.

The family of Commander Leonard "Ray" Womack created this Life Tributes page to make it easy to share your memories.

Ray Womack was the middle son of...