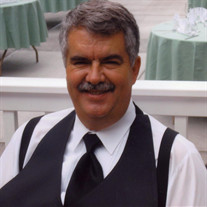 Lerry Dean Nelson, 59, loving husband and father passed away quietly on April 5th, 2018. He is survived by his wife (Barbara), two sons and daughter (Jason, Jeremy, and Jennifer), three grandchildren (Emily, Autumn, and Kali), and great grandchild (Ella). He is also survived by his parents (Ken and Ethel), his two brother (Ron, Randy), and sister (Connie), and many nephews and nieces. Lerry was born on February 22, 1959 in Bozeman, MT to Ken and Ethel Nelson. He was the big brother to his two brothers, Ron and Randy, and his sister, Connie. In 1997, he graduated from Fort Collins High School in Colorado and then continued on to Colorado State University where, in 1982, he graduated with a Bachelor’s Degree in Mechanical Engineering. In July of 1982, Lerry was hired by the Puget Sound Naval Shipyard in Bremerton, WA. He would later retire from PSNS in 2014. But it was during his time there where he met his future wife, Barbara, when she started working for his code in 1984. Even before he convinced her to go on a date with him, he would tell his co-workers “She’s the one I’m going to marry.” And that’s exactly what he did in November of 1985 in Big Timber, MT. He was a loving husband for 32 wonderful years and an amazing father to two sons, Jason and Jeremy, and a daughter, Jennifer. Lerry’s first love, besides his wife and family, was woodworking. He loved building wood projects. Initially, his projects were small, making jewelry and music boxes, Christmas ornaments, puzzles, and turning bowls and pens on his lathe. But that only satisfied him for so long. His love for building things grew so large that in 1998, he and his family moved onto 5 acres in a 22’ RV while he built a house and separate shop. After a couple of long years and a broken back from falling off the roof, both were complete. He continued expanding his woodworking endeavors after that by making golf putters and building furniture like rocking chairs, dining room tables, and entertainment centers, basically whatever his family ordered from Lerry’s wood shop. Amazingly enough, somewhere in-between filling those orders, he found time to build a drift boat… a very large, but beautiful, drift boat. The drift boat also helped fill one of his other passions he had in life, fishing. He loved to float and fly fish on the rivers, especially the Yellowstone River. He even tied his own flies. He couldn’t fish enough. One of the first things he did after he retired was buy a new boat. He loved to take his boat out on the sound every chance he could and would fish, crab, shrimp or just enjoy the day out on the water. Other than being in his garden or maybe kicking some butt in a board game, there wasn’t much else that made him happier than spending time on the boat with his family and friends. Lerry had a big heart and loved doing things for his family and friends. If you needed him, he was there. He truly was an amazing, generous, and loving man. He will be missed by everyone who was lucky enough to know him. The best of us always leave too soon and he was by far the best of us.

The family of Lerry D. Nelson created this Life Tributes page to make it easy to share your memories.