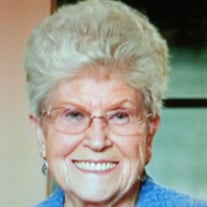 Lillian began life in Tacoma as the first-born of Mary Ruby (Rinnan) Hagbo and Archie Habgo, with her full, living-filled life cycle bringing her back to her hometown for her final years. Her childhood was spent in the Puget Sound area (Tacoma and Seattle) until the WW2 job market took the family to California, where she graduated from Santa Ana High in 1943. While there, she met her future husband, Frank. They married in 1946, shortly after he returned from the war, and settled in the Wilkes Barre, PA, area, where their first two sons, Charles and David were born. The family soon moved to the northwest – Tacoma, Bremerton, Purdy, Rosedale, Idaho Falls, back to Bremerton -- finally settling in the Port Orchard area. They welcomed a third son, Bruce, while living in Bremerton. Always the busy bee, she devoted herself to family activities, community and church concerns, as well as part-time employment. After Frank passed in 1982, Lillian continued to keep her life full with family, friends, and work. In the early ‘70’s she moved her living and activity base back to Tacoma. When Lillian was 80, she joined her and Frank’s long-time friend, Bob Wilson, at his home in the San Diego area. They spent several years together traveling, RV camping, cruising, and generally enjoying being alive while Bob was still able. She returned to Washington to live with her sister, then settled at the Tahoma Terrace independent living retirement apartments in 2011, where she made many good friends. She enjoyed her ability to live independently, to have in-house activities available (especially her bingo, cribbage and pinochle games), to have a facility for her annual family and friends gathering, to be near transit and community amenities, and to be close enough to family to visit and be visited often. She almost always had a supply of homemade cookies which she gave out to family and friends along with dozens (hundreds?) of her crocheted scrubbies. Her years there were happy ones. Lillian was predeceased by her husband Frank and her son Bruce. She is survived by her sister, Dolores (Jack); sons Charles (Barbara) and David (Darlene); four grandchildren, five great grandchildren and many beloved cousins, nieces and nephews. A celebration of Lillian’s life will be held on October 28, 2:00 – 4:00 pm, at University Place Presbyterian Church, 8101 27th Street W, Tacoma.

Lillian began life in Tacoma as the first-born of Mary Ruby (Rinnan) Hagbo and Archie Habgo, with her full, living-filled life cycle bringing her back to her hometown for her final years. Her childhood was spent in the Puget Sound area (Tacoma... View Obituary & Service Information

The family of Lillian Ruby (Hagbo) Gelsleichter created this Life Tributes page to make it easy to share your memories.

Lillian began life in Tacoma as the first-born of Mary Ruby (Rinnan)...