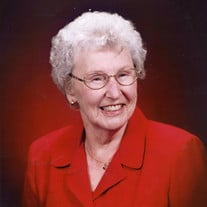 Lillie Mae Russell was born December 31, 1924 in Mountainburg, Arkansas. She died February 6, 2021 at St. Michael’s Hospital in Silverdale, WA. Lillie Mae Harris grew up on a farm with her parents, Linda and Bud Harris and four brothers. Her dad was known in the county for his generosity and help to his family and many friends especially during the Depression. The Harris’ always had food to share and often provided homes for people in need. The Russell family moved to the area from Little Rock and became acquainted with the Harris’ where the community met for church. She married the love of her life, John Russell, upon his return from WWII where he had been a Prisoner of War (POW) for 42 months. At the encouragement of his brother James, John and Lillie Mae moved to Port Orchard in 1946. Both were hard workers building their home, growing a large garden, and providing for their family. They had two daughters, Doris and Tish. Lillie Mae was a proud homemaker and was known for her spotless home and wonderful cooking. There was the smell of cookies having been baked along with the fragrance of furniture polish – especially on Fridays. There were always special dinners with family and friends. The Russell family went on many memorable camping trips, spontaneous picnics and long trips to see family in California, Nevada, Oklahoma and Arkansas. Lillie Mae was a long-time member of the First Baptist Church in Port Orchard. She taught Vacation Bible School, was on the kitchen committee, and was with the group from church that went each week to Retsil Veterans Home to sing. After John died in 1990, she surprised her family and people who knew her well by learning to drive. She purchased her first car with the help of her granddaughter, Sara. She was SO PROUD of herself when she got her driver’s license at the age of 64! Lillie Mae traveled to Australia, New Zealand, Italy, England, France and Greece with friends. She also went on tours of southern states and autumn foliage tours in the northeast states. She was involved with her grandchildren and great grandchildren. To the children of Tish’s friends, she was an honorary grandmother. She was known for her school field trip expertise. Lillie Mae was an expert shopper and went on many shopping extravaganzas. Lillie Mae is survived by her daughters, Doris Osgood (Gary) and Patricia “Tish” Hatfield (Craig) Grandchildren: Wayne Osgood, Jeff Osgood, Mark Hatfield, Sara Hatfield, Lisa Hatfield Adams Great Grandchildren: Irelyn Osgood, Landon Osgood, Diane Osgood, Ethan Adams, Owen Adams, Holden Hatfield

The family of Lillie Mae Russell created this Life Tributes page to make it easy to share your memories.