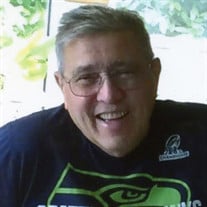 Louis Antonio Jaramillo died peacefully on August 8, 2018 in Bremerton, Wa after a long illness. Born November 3, 1942 in Las Vegas, New Mexico to Demetrio and Maria Jaramillo, he was the last in line of 6 children and the only son. After his formative years, his adventurous spirit led him to being stationed overseas in the United States Air Force at Lakenheath AFB in England. It was there that he met his wife, Sheila in the fall of 1963. While stationed there, he immersed himself in the culture, getting to know the locals and even made sure to purchase Sheila’s uncle Tom his favorite pipe smoking tobacco, “Prince Albert”. Their three children were born in England before he moved his family stateside back to New Mexico in 1966. After obtaining his business degree, he spent 33 years working for the Social Security Administration as a Contract Representative. He received many letters and thanks from clients with gratitude to his time and continual personal touch. The family moved from New Mexico to Maryland and subsequently to Washington state where he retired in 2003. Louis was in a continual pursuit of knowledge and was dedicated to his Catholic faith and proud of his Basque heritage. He was fond of reading classic Spanish and English literature in his spare time. His lifelong love of reading was fostered as a young child when he sat with his mother learning old Spanish words from her bible. He loved being a husband, father, and grandfather and often made a point of teaching children different ways of learning and coming up with new ideas. In his spare time, he enjoyed carpentry and filled his home with complete furniture sets, such as couches, tables, chairs, and beds. He also enjoyed carving various figurines from wood. A family favorite is a crucifix that he carved while in Santa Fe. In his retired years he enjoyed building different rock formations and walkways in the garden at the home that he shared with Sheila in Southworth. Louis and Sheila loved to walk the beach with their cat, Wiggles. In addition to reading, he liked playing Scrabble, crosswords, movies, music, and discussing politics & current events. He will be greatly missed by all who knew and loved him. He is survived by his wife Sheila, sons Charles Jaramillo Bray (Shannon) and James Jaramillo, daughter, Ana Bicakci (Oner), sister, Anna Gallegos, seven beloved grandchildren (Iliana, Aydin, Cassandra, Evren, Liam, Finnegan, and Miranda) as well as many nieces and nephews. Louis’ funeral Mass will be held on Friday, August 31, 2018 at 11:00 at St Gabriel’s church in Port Orchard, preceded by a rosary at 10:30. A reception will follow immediately in the church hall.

Louis Antonio Jaramillo died peacefully on August 8, 2018 in Bremerton, Wa after a long illness. Born November 3, 1942 in Las Vegas, New Mexico to Demetrio and Maria Jaramillo, he was the last in line of 6 children and the only son. After his... View Obituary & Service Information

The family of Louis Antonio Jaramillo created this Life Tributes page to make it easy to share your memories.