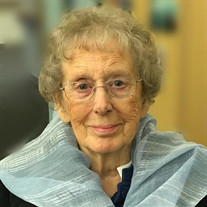 Louise Haugen, born November 9, 1929 in Vancouver, WA, joined her heavenly family on April 11, 2022. Louise had lived in Port Orchard, WA since 1974, having also lived previously in San Francisco, Gasquet, Monterey Park and Crescent City, CA; Curry, Lignite, Seward and Fairbanks, AK; Vancouver, Gig Harbor, Victor and Port Orchard, WA. She has three daughters, Sharon Martin of Belfair, WA, Sheila Corey (Steve Turner) of Juneau AK, and Lauralyn Corey of Sunnyslope, WA, with her first husband, Edward Corey (deceased 1997), and four stepchildren, Bruce Haugen(Sandy) of Algona, WA, Jeannette Winn (Michael) of Tahuya, WA, Jay Haugen (Patricia) of Pasco, WA, and Julie Boardman of Cottage Grove, OR from her husband Milow Haugen (deceased 2008). Louise was adventure bound since her earliest years as a child. Her parents (Albert and Muriel Nichols) built a homemade travel trailer and traveled around Mexico and parts of Texas and California. She would relate tales of how her father had modified the backseat of their family station wagon so the girls (Louise and her sister Blanche) never had to stop along the way to use the restroom…it was right under that back seat! At the family home in Gasquet, Louise had pet goats and rabbits, and grew up drinking goats milk. She was her fathers co-pilot when he went flying in his private plane, a WWII trainer, as no one else in the family would fly with him because the plane didn’t have a covered cockpit and it was ‘cold up thar’. Louise was an avid outdoors woman, enjoying skiing (water and snow) , snow shoeing, hiking, camping, picnicking, swimming, gardening, hunting and fishing. She loved square dancing and being active in her church. She grew amazing vegetable and flower gardens in Fairbanks, Victor and in Port Orchard. She passed along her love of the outdoors, birds, animals and plants to her children; she gifted generously to environmental organizations such as Save the Bees, Save the Butterflies and World Wildlife Fund regularly. She was also concerned for and supported Veterans, Doctors Without Borders, Arthritis Foundation, and various missions for Orphans and Christian Outreach. She was a prolific homemaker, knitting many sweaters, scarves, mittens, hats and socks; sewing clothes for square dancing and for her daughters for school. She canned fruits and vegetables, baked bread and was an avid reader. Living in a remote Alaskan community when her daughters were quite young she home schooled her oldest daughter, and cooked and baked on a coal burning stove. She had a dry wit and keen sense of humor that often delighted her friends and family. She could slide in an unexpected remark very calmly and give her companions a good belly laugh, while maintaining a straight face. Raised with impeccable english manners, she would not speak unkindly of people or dare cough without raising her hand to cover her mouth…even in the last hours of her life. She lived to see the fruit of her heathy living in mind, body and spirit as she was the longest living person in her small nuclear family. Louise started a food service career as a waitress in the Curry, Alaska Rail Road train depot in about 1948. From there she cooked at Lignite lodge for the coal miners, made “spud nuts” at the local Fairbanks donut shop, and was a school cook at North Mason school district from about 1966 until about 1972. She and her first husband were partners in a coal mining endeavor (Arctic Coal Company) and also a residential construction company out of Fairbanks, AK. She was an oyster shucker for a period of time, working for Minterbrook Oyster Company in Gig Harbor, and she worked for the Bremerton Sun newspaper from 1976 until 1989 as an ad stuffer. The reason for her resignation was recorded on official paperwork as ‘tired of working’. Once she retired, she and her husband Milow became world travelers. They traveled abroad to Mexico, Canada, New Zealand, England and Norway and traveled domestically to Alaska, California, Missouri, Pennsylvania and Hawaii. She is survived by her daughters and numerous grandchildren and great grandchildren, and her step children, step grandchildren and step great grandchildren. Additionally she is survived by her nephew, Forest Emerson of Clarkston, WA For Celebration of Life following inurnment, please RSVP to Sharon Martin at 513-667-3777 for details. Celebration will be held from 2:30 p.m. to 5:30 p.m.

The family of Louise Haugen created this Life Tributes page to make it easy to share your memories.