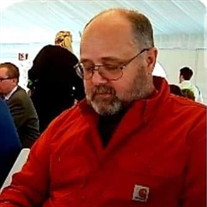 Lowell Christopher Blankenship was born in 1963 in Bremerton, WA, and passed away peacefully on April 18, 2019, at his home in Port Orchard, WA. He was preceded in death by his by his mother, Sharon Kay (Main) Blankenship. He is survived by his father Gary and step mother Chris of Bremerton, brother, Adam of Tacoma; sister, Ellen, of Cannon Beach, OR, and four nieces and nephews, Ben, Josh, Ana, and Kerry. After a tour in the Air Force as an electronic maintenance specialist and a variety of other jobs, Lowell graduated as an apprentice in June, 1992. As a mechanic in the shipfitter shop, Lowell specialized in missile compartment modifications and battery changeouts, receiving several accommodations for his exemplary work. He progressed in his career and was promoted to shipfitter foreman, the position he held when he passed. Lowell was an avid gamer, playing and collecting almost every kind of board and military game. He invented some games and made modifications to many others that were accepted. He tested games for his fellow players. He even went so far as to paint his own miniature soldiers. He would tell you the tactics needed for Napoleon to win Waterloo. His friends and family saw him as generous, thoughtful, imaginative, loyal and pragmatic. If a friend could not afford to take a sick pet to the vet, Lowell would pay the bill. He grubstaked new game developers. Lowell enjoyed his family and their varied outings, including the annual trip to Cannon Beach to play in the sand and surf. One highlight he relished was the building of a cardboard boat to sail out to sea and burn in a Viking “funeral”. There will be no public services, as Lowell would have “hated” that…however the family will send him off in a semi-authentic Viking funeral sometime in the near future.

Lowell Christopher Blankenship was born in 1963 in Bremerton, WA, and passed away peacefully on April 18, 2019, at his home in Port Orchard, WA. He was preceded in death by his by his mother, Sharon Kay (Main) Blankenship. He is survived by... View Obituary & Service Information

The family of Lowell C. Blankenship created this Life Tributes page to make it easy to share your memories.

Lowell Christopher Blankenship was born in 1963 in Bremerton,...