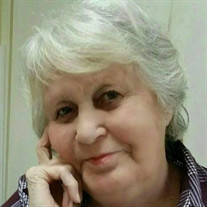 Lynda Mae Rinacke was born in Buckner, MO on July 30, 1943 to George Thomas and Ruth Marlow. She attended Buckner Elementary school and graduated from Fort Osage High School in 1960 where she was involved as a majorette. She attended Oakland Methodist Church in Grain Valley, Mo. She attended Springfield College where she met and later married Bernie Joe Purdy from Harris, MO. Lynda and Bernie had two daughters, Elizabeth and Jody. After their marriage ended, Lynda reunited with her high school sweetheart, James Calvin Rinacke upon his return from an overseas tour in the US Navy. They were married on New Years Eve in 1972 and had a son, James Calvin Rinacke, Jr. in 1973. Calvin and Lynda took their children on adventures across the country and made many lifelong friends along the way. The family started their lives together in Jacksonville, FL. They moved to Lemoore, CA in 1974 and to Bremerton, WA in 1978 where they decided to stay and make Washington State their forever home. In celebration of their new lives and their beautiful home, they named their private street Rinacke Court. Lynda always loved kids and served her community well. She ran a daycare for a few years, where she met some forever friends and later served as a teacher’s aid at North Kitsap High School and in special education Francis Hadden Morgan school for autistic students. She later ran her own business where she met many friends who love her dearly, to this day. Lynda ensured that family gatherings for holidays, birthdays, and simply to spend time together always built memories that will last a lifetime. Over the years, Cal and Lynda spoiled seven grandchildren who were all blessed to have been able to know them in life. As a result, Lynda became known as “Nannie.” Lynda had a very strong faith, which consoles us, because we are confident she is now in the presence of her Lord and Savior. She had a sense of humor to rival no other, everything about spending time with her made you smile, if not laugh. She always made you feel loved. She created wonderful memories no matter what she did, whether crafting, playing horseshoes, or interacting via games on Facebook. Lynda was an avid reader, dog lover, crafter, and feeder of squirrels. Memories of camping, chatting over coffee, and spending time sitting peacefully on the porch will continue to fill Lynda’s family and friends with joy. She loved daisies, hummingbirds, chocolate, and did we mention squirrels? Lynda’s legacy is one of love and care for others, both near and far. Over the years, those whose lives she touched became part of her family. Many attending this service or watching at home can attest to Lynda’s kind and generous spirit. We are all better for having known and loved Lynda. Lynda is preceded in death by her parents, George Thomas and Ruth Elizabeth Marlow, her brother, Billy Marlow, and her husband, James Calvin Rinacke. She is survived by her three children, Daughter Elizabeth Lavonne Pettay (and Husband Tim Pettay), Daughter Jody Lynn Purdy and Son James Calvin Rinacke Jr. She left behind seven adoring grandchildren, Grandsons Chad Calvin Pettay, Clayton Patrick Pettay, Cameron Jo Pettay, Bryant Thomas Enloe, Dustin James Hovland, Jacob James Rice Rinacke, and Grandaughter Macenzie Lynn Hovland. She also left behind numerous and much loved nieces and nephews.

Lynda Mae Rinacke was born in Buckner, MO on July 30, 1943 to George Thomas and Ruth Marlow. She attended Buckner Elementary school and graduated from Fort Osage High School in 1960 where she was involved as a majorette. She attended Oakland... View Obituary & Service Information

The family of Lynda Mae Rinacke created this Life Tributes page to make it easy to share your memories.