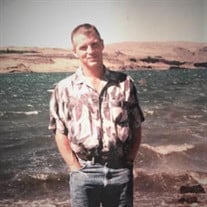 Mack Janes, 61, died July 3, 2021, after a brief battle with liver disease. Mack was born on January 11, 1960, in Bremerton, WA to Veva and Virgil Janes. Mack grew up in Manchester, WA – with sisters, LaDesa and Ronda and brother, Auston. He attended Orchard Heights Elementary, Marcus Whitman Junior High, South Kitsap High School (Class of 78), and Big Bend Community College. Mack married his high school sweetheart, Willa Searles, on June 20, 1981. This year would have marked their 40th wedding anniversary. Mack and Willa welcomed daughters, Chelsey Jeanne in 1984 and Courtney Elyse in 1986. Mack was passionate for anything aviation and his favorite job was working for Alaska Airlines as a Policy and Procedures Senior Specialist for Cargo Operations. He began his career there in 1999 and worked until earlier this year. He very much enjoyed his co-workers, and the flight benefits available to him and the girls. Mack and “his girls” had fun vacationing in Mexico, Hawaii, Disneyland, Las Vegas, Whistler, Washington DC and New York. Mack traveled back and forth to see Chelsey at Pepperdine and Courtney at University of Arizona and WSU. Mack will be remembered for his wicked sense of humor. He loved to tease and make family and friends laugh. Mack leaves behind his daughters, Chelsey Janes and Courtney Vetter; grandson Cooper Vetter; and granddaughter Willa Jo Vetter; his brother Auston (Audrey); and sister Ronda (Larry Knapp); numerous nephew and nieces; extended family; friends and co-workers. Mack was preceded in death by his forever love, Willa Searles Janes; parents, Virgil and Veva Janes; and his sister, LaDesa Hosford (Ernie). Mack will be laid to rest at Sunset Lane. Celebration of Life to be held at Yoked Farmhouse and Brewery on Saturday, August 14, 2021 from 2:00 - 6:00 p.m. Outdoor event with tents for shade. All those who knew and loved him are welcome.

The family of Mack Janes created this Life Tributes page to make it easy to share your memories.