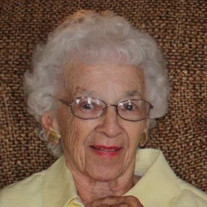 Margaret Irene Heggem Kvinsland, a long-time resident of Port Orchard, died peacefully in Gig Harbor, Washington on May 27, 2017. She was a devoted mother, beloved Mormor, Farmor, and Oldemor, and delightful Auntie Muggy to her extended family, as well as a loyal friend. Her faith and Norwegian heritage were a large part of her daily life for 97 years. Margaret was born in Ballard on September 5, 1919, the daughter of Ingvald and Marit Heggem, immigrants from Norway. A member of Ballard First Lutheran Church, and a proud graduate of Ballard High School, she and her four siblings, grew up in a large frame house among hard working Scandinavian neighbors. Every summer the family traveled by boat to Hammersley Inlet near Shelton, to their beloved Heggembo beachfront, still enjoyed by her family, four generations later. She met the love of her life, Stener Randolph Kvinsland, a student athlete from Poulsbo, in the library of PLC, now Pacific Lutheran University in Parkland. She enjoyed recalling that moment, "I saw him sitting there, and immediately walked over and introduced myself!" She earned a provisional teaching degree in 1940 and a BA in Education in 1962 that prepared her for a successful teaching career. Margaret and Stener married in Ballard on June 21,1941, and settled in Retsil. They later bought a house on Beach Drive in Waterman and created a vibrant, comfortable home for their children, Steve, Julie, and Eric, often hosting extended family, and friends. Margaret's kitchen was the center of the home, her cooking was legendary, and her Norwegian "Velkommen" hospitality foremost at all gatherings. Margaret taught elementary school in Central Kitsap for two years and in South Kitsap for twenty-three years. She retired in 1973, and enjoyed an active retirement, traveling the world with Stener, and her in-laws, Howard and Eugenia Kvinsland. For seventeen years, they were Snowbirds and wintered in both Arizona and California, joining a caravan of college friends. After Stener died in 1998, she continued to travel with family and friends to Paris, Norway, Hawaii, and California, also enjoying several cruises. She was an active member of the Ann Wilson Guild at Children's Hospital, Triads, SK Faculty Wives, South Kitsap Family Kitchen, Q-Club of PLU, and Elim Lutheran Church, participating in Choir, Waterman Circle, Altar Guild, and supportive of Lutheran World Relief by knitting countless sweaters for children around the world. In her later years, she lived independently at Ridgemont Apartments, hosting frequent visits from family and friends. She never hesitated to remind us, "I have had a wonderful life." In addition to her husband and parents, she was predeceased by her brother, Ole Heggem, sisters Mabel Morrison, Katherine Carman, and Lillian Highfill, all of Seattle. She is survived by her children, Stephen Kvinsland of Kennewick, Julie Poier of Mill Creek, and Eric Kvinsland of Port Orchard; daughters-in-law, Judy and Janice Kvinsland; grandchildren, Anna, Paul, Kate, Emily, Elizabeth, Leif, Lars and Britta; great-grand children, Songe, Knute, Krista, Stener, Myles, Madison, Jordyn, Everly, and Mckenna; and many nieces and nephews. A Celebration of Life will be held on June 9 at 2:00 p.m at Elim Lutheran Church, 5911 East Hillcrest Drive, in Port Orchard where Margaret was a member for over 70 years. Reception to follow in the Fellowship Hall. Memorial contributions may be sent to Elim Lutheran Church at the above address.

Margaret Irene Heggem Kvinsland, a long-time resident of Port Orchard, died peacefully in Gig Harbor, Washington on May 27, 2017. She was a devoted mother, beloved Mormor, Farmor, and Oldemor, and delightful Auntie Muggy to her extended family,... View Obituary & Service Information

The family of Margaret Kvinsland created this Life Tributes page to make it easy to share your memories.