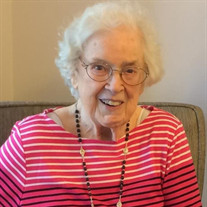 (Margaret) Norma Snow peacefully passed away of natural causes at the age of 93 at Provi¬dence Mount Saint Vin¬cent in Seattle, on May 20, 2020. Norma was born on July 13, 1926, the third of four daughters to Norman and Gertrude Howard, in Newark, New Jersey. A young woman during the war years, Norma met Raymond Snow on a blind date while he was attending City University of New York as a member of the US Army. Ray and Norma married after his return from serving in Europe in April, 1946, and they moved to Pullman, Washington, so Ray could resume his college studies at WSU. After a few years in Elma, the Snows made their family home in Port Orchard in the mid-1950’s. Norma was busy raising a large family for many years, when the call came for her to serve as the first Director of Religious Education at St. Gabriel, Port Orchard. Norma served in this capacity for nearly twenty years, and loved the work and the people she met through leading faith formation. Norma spent her final years at Providence Mount Saint Vincent, where she was lovingly and gra¬ciously cared for by the staff there. Norma is predeceased by her loving husband of 67 years, Ray, her son Mark, her grandson Jesse, and daughter-in-law Susan, as well as her three sisters whom she cherished. She is survived by sons Paul (Mary Anne), Steve (Mary Kay), and Tim Snow, and daughters Colleen (Ted), Gretchen Schaefer (Jerry), and Kelly Almeleh (Larry), and daughter-in-law Diana Snow. Norma loved her 16 grandchildren, 9 great grandchildren, and two great-great grandchildren with all her heart. Family burial will be at Haven of Rest in Gig Harbor. A memorial mass is tentatively scheduled for Norma’s 94th birthday, July 13, 2020, at the Chapel at Providence Mount Saint Vincent. In lieu of flowers, memorial donations can be made to the Providence Mount Saint Vincent Foundation, or the Archdiocese of Seattle Called to Serve as Christ Campaign, c/o St. Louise Church, 141 156th Ave. SE, Bellevue, WA 90007, or on the website at stlouise.org.

(Margaret) Norma Snow peacefully passed away of natural causes at the age of 93 at Provi¬dence Mount Saint Vin¬cent in Seattle, on May 20, 2020. Norma was born on July 13, 1926, the third of four daughters to Norman and Gertrude Howard, in... View Obituary & Service Information

The family of Margaret Norma Snow created this Life Tributes page to make it easy to share your memories.