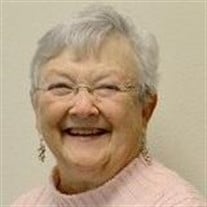 Marian A. Borg of Olalla, WA, passed away on April 29, 2017. She was born March 23, 1937, and was proud to be the daughter of hard-working famers, Walter and Elsie Fickes of Herman, Minnesota. Marian earned a B.S.in Elementary Education from Gustavus Adolphus College, St. Peter, MN, where she met and eventually married Paul with whom she shared almost 57 years of marriage. She was immensely proud of and grateful for their children, Leah Jacobs of Port Orchard, WA, and Jamin Borg of University Place, WA, their spouses, Jim Jacobs and Karen Borg, and grandchildren Amber Jacobs Rothfus (Nolan), Samantha Jacobs, and Mikayla and Peyton Borg. She is also survived by a sister, Meg Nordlie of Bloomington, MN, and Meg’s children, Bryan and Susan. She was an active member of Agnus Dei Lutheran Church, Gig Harbor, always looking for best buys for the Backpack for Kids program. The Dining for Women program at Agnus Dei Church received her avid support. A dedicated gardener she found great satisfaction as a member of Horsehead Bay Garden Club, Gig Harbor, for many years. With Leah, over 30 or so years she developed a cottage business, the foundation product of which was matching table linens. Sewing was a passion of hers as was cooking. Should any want to memorialize her she would suggest Backpack for Kids or Dining for Women or a charity of one’s choice. Plant a flower in her memory, and thank the gardeners, the cooks, and the charity workers of the world! A memorial service will be held at Agnus Dei Lutheran Church, 10511 Peacock Hill Ave. NW, Gig Harbor, WA 98332 on June 3, 2017, at 2:00 p.m., with reception in the church’s social room immediately after the service. Other information about the congregation can be found at agnusdeilutheran.org and Facebook.com/ADCLGigHarb or; the telephone number is 253-851-6222.

Marian A. Borg of Olalla, WA, passed away on April 29, 2017. She was born March 23, 1937, and was proud to be the daughter of hard-working famers, Walter and Elsie Fickes of Herman, Minnesota. Marian earned a B.S.in Elementary Education from... View Obituary & Service Information

The family of Marian A. Borg created this Life Tributes page to make it easy to share your memories.