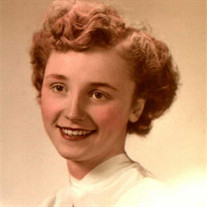 Marilyn Louise Kaes, a resident of Port Orchard for more than 46 years, passed away peacefully on June 5, 2019. Born September 24, 1934 in Sherbrooke, Quebec, Canada, Marilyn was the oldest of 5 children born to Gerald and Margaurite (Quinn) Thornton. Her parents moved their family to Boston, Massachusetts in 1939 where she grew up with her two brothers and two sisters. Marilyn was working at the Roxbury Library in 1951 when she met and fell in love with a co-worker, Bill Kaes. They both graduated from separate high schools and married in October of 1953. Bill and Marilyn raised five children together. They relocated twice to follow Bill’s shipyard career. They moved from Massachusetts to the San Francisco area of California in 1964, and then to Port Orchard, Washington in 1973. They built a home in Port Orchard and never moved again. Over these years, Marilyn had a few part time jobs from time to time, but the job that she truly devoted herself to was taking care of her family and being a Homemaker. Marilyn enjoyed weekend activities with the family, both day trips to new or favorite places, and weekend camping trips somewhere close to home. Summers always included long trips in the trusty station wagon exploring the west coast or travelling to the east coast to visit family. She and Bill continued these activities throughout their golden years taking many leisurely trips in their travel trailer and still enjoying spending time at the campgrounds close to home. She loved taking the grandchildren (by turn) on the shorter trips. They ventured up to Alaska annually to visit son Bill and she spent many hours enjoying time on his boat while the boys were fishing. They went on several cruises and other trips abroad, exploring Europe, Egypt, and Greece. Marilyn’s hobbies included all kinds of needlework at which she excelled; sewing, knitting, crocheting, and embroidering. She enjoyed creating beautiful porcelain dolls from start to finish. She really looked forward to spending time with her friends – even if it was to do nothing more than sit down for a cup of tea and a chat. She liked to relax with a good book or a jigsaw puzzle. Her favorite thing to do, and a means of relaxation for her as well, was baking goodies for her family and friends. There was always a fresh baked treat for anyone dropping by her home. Marilyn was the quintessential wife and mother of the 1950’s television shows; a loving, loyal, faithful wife and devoted mother. She was always there for her children, mentoring and loving, regardless of the challenges life presented her with. As her family grew she cherished her role as a grandmother, always listening and guiding with a special love that only a grandmother could impart. She never placed herself before anyone else. She was compassionate, she was generous, she was gentle and she was stern. Looking through her photo albums, it is easy to see that she lived a very full life, always surrounded by what was most important to her: Her family, her friends, and her faith. She promised God she would be faithful, she promised her husband she would be loyal, and she promised her children she would always be there for them. She never wavered in her faith in God; she loved her family and rejoiced in her friendships. She kept her promises. She has climbed the mountain, passed all the tests, completed her journey, and now she basks is the light of God with her husband and son and all of her relatives and friends that preceded her. She is happy; she is fulfilled, and we will hold her in our hearts forever. Marilyn was predeceased by her husband of 60 years, William ‘Bill’ Kaes; their son Stephen; her siblings Edna and Richard; and her parents. She is survived by her sons William ‘Bill’ Kaes of Ketchikan, Alaska, Brian (Debbie) Kaes of Port Orchard; her daughters Linda Pryor of Port Orchard and Dianne (Ron) Soete of Belfair; her 15 grandchildren, and 18 great grandchildren. A memorial service will be held at St. Bede’s Episcopal Church at 1578 Lider Road in Port Orchard Saturday, June 29th at 11AM. A reception will be held in the Parish Hall following the service.

Marilyn Louise Kaes, a resident of Port Orchard for more than 46 years, passed away peacefully on June 5, 2019. Born September 24, 1934 in Sherbrooke, Quebec, Canada, Marilyn was the oldest of 5 children born to Gerald and Margaurite (Quinn)... View Obituary & Service Information

The family of Marilyn Louise Kaes created this Life Tributes page to make it easy to share your memories.

Marilyn Louise Kaes, a resident of Port Orchard for more than...