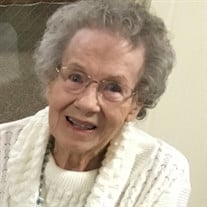 Marjorie was born in Iowa on July 25, 1923 and spent her later childhood in eastern Washington. When Marjorie was 14, her mother died and Marjorie was taken out of school to mind her brothers and sisters. She met Arthur Ives in Grand Coulee where he was working as a carpenter on the Grand Coulee Dam, and they were married on November 11, 1939. They moved to Tacoma where they had two children, Sarah and Fred. When Arthur went into the navy near the end of the war, Marjorie worked as a riveter at Boeing Aircraft. After the war, they moved to Port Orchard, where they had a third child, Dorothy, and lived for the next 62 years. In Port Orchard, the emphasis was on family, friends, and the sawmill. Besides being a homemaker, mother to three, den mother, 4H leader, and an active PTA member, Marjorie was the front office for the sawmill. She made friends easily and had a full life. They played a lot of pinochle with relatives and friends. They traveled when they could, mostly to visit relatives around the country, but occasionally for the experience, such as their trip to the 1967 World’s Fair in Montreal. She was always happiest when she was doing, and after her children left the nest, she worked part time as a cook at Marcus Whitman before finally retiring. She liked to have a small dog about. One of her favorites was named “Buffy”. In 2008 they moved to Claremont Senior Living when Arthur could no longer live comfortably at home. He passed in 2010 and Marjorie remained at Claremont for her last nine years. Most people who knew her would describe her as a sweet lady. She could usually be found at the first floor dining room or in the activity room playing games. She passed away peacefully on June 18, 2019. She is survived by her three children, five grandchildren, and two great-grandchildren, as well as other relatives and friends. Her generous and loving nature will be missed by all. There is a Committal Service scheduled in the near future, and a reception in her honor will be held at Rill Chapel, 1151 Mitchell Avenue, Port Orchard at 3:00 pm on Tuesday, July 2, 2019.

Marjorie was born in Iowa on July 25, 1923 and spent her later childhood in eastern Washington. When Marjorie was 14, her mother died and Marjorie was taken out of school to mind her brothers and sisters. She met Arthur Ives in Grand Coulee... View Obituary & Service Information

The family of Marjorie Lois Ives created this Life Tributes page to make it easy to share your memories.