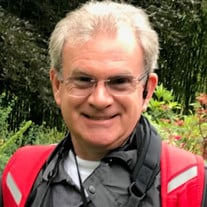 Mark Hoynes, 62, was born on May 21, 1956 in Landstuhl, Germany to Emmet and Joy. He passed away on January 18, 2019 at his home in Port Orchard, WA after a brave battle with pancreatic cancer. Mark spent most of his childhood growing up in Bremerton, WA with his sister, Lisa, and two brothers, Sean and Pat. He attended Our Lady Star of the Sea Catholic School and West Bremerton High School, graduating in 1974. In his early teens, Mark’s love of art and painting began after meeting an artist on his paper route. It was a passion that would continue to grow and spread throughout the rest of his life. He attended Olympic College following high school and pursued a fine arts degree at the University of Washington. In 1982 after graduating from the UW, Mark began his teaching career at Our Lady Star of the Sea as a seventh grade teacher. Following his first year as an educator, Mark took a summer trip to Europe with his friend Jim, where they traveled to multiple countries. Mark continued to teach at Star of the Sea for the next several years. During this time, he earned his master’s degree in education from Seattle University. In 1987, while teaching at Star of the Sea, Mark met and married Nancy Buley. Later that year, they welcomed their daughter Emily into their lives. Two years later, another daughter named Katie joined the family. In 1990, Mark and the young family moved to Bad Windsheim, Germany where Nancy had a job working for a Department of Defense School. During this time, Mark worked as a substitute teacher, sightseer, and stay-at-home dad to Emily and Katie. Mark spent a lot of time with the girls playing Barbies and watching Disney movies. One of his favorite ways to help them celebrate their birthdays was to decorate their birthday cakes, sometimes late into the night! The family lived overseas for three years, which allowed Mark the opportunity to visit many countries, important sites, and participate in the local Volksmarches. Upon returning home to Washington in 1993, Mark began teaching at Manchester Elementary School as a 5th grade teacher. His career at Manchester continued for the remainder of his life, spanning over 25 years. In 1995, Mark and Nancy welcomed their son, Zach, giving Emily and Katie a brother. Mark and Zach had a close bond, which led to many activities together, including hiking, watching hours upon hours of “Lord of the Rings”, and Wrestlemania. Armed with three kids, the family would go on to experience many travels and adventures. Some favorite places included Disneyland, Universal Studios, Hawaii, Canada, and the Pacific Coast. Mark was well-loved at his school, both as a teacher and as a coworker. He included his passion for art in his teaching and created many different art projects for his students. Mark was especially proud of a Dale Chihuly-esque chandelier that he and his students created for the library. Among his fellow teachers, Mark was known for his caring, compassionate, and supportive nature. Mark was also the tech liaison for Manchester for many years and considered the go-to guy for any technology problems in the building. In 2011, Mark’s wife Nancy was diagnosed with brain cancer and passed away. The loss was deeply felt by the family and Mark bravely continued on as a single parent to his children. He supported them as they finished high school, college, graduate school, and as they began their lives as young adults. In 2013, Mark began a new relationship with his long-time friend and colleague, Sharon Vetter. Sharon’s sons, Kyle and Aaron, were former classmates of Emily and Katie, and her daughter, Katie, was one of Mark’s students. Mark and Sharon’s relationship grew over their shared love of art, travel, walks, and teaching. In 2015, Mark and Sharon married and combined their families. Mark and Sharon traveled together to Bermuda, France, Washington D.C., and several states in the U.S. They continued to support their six children while rooting for separate football teams ~ Go Dawgs! Go Cougs! During their relationship, Mark and Sharon’s family continued to grow with the addition of Kyle’s wife, Courtney, and Katie’s husband, Ben. In 2016, they also welcomed their first grandson, Cooper, to Kyle and Courtney. In February of this year, the family will welcome a sister for Cooper, to be named Willa. Though it ended far too early, Mark’s life was full and rich with love, family, and his Catholic faith. His passions included art, wood-working, reading, traveling, taking walks, and enjoying family celebrations. He cheered for his Huskies and Seahawks faithfully during football season, even when they played badly. He celebrated many happy events in all his children’s lives and made a point of being there for them, always. Mark was deeply loved throughout his entire life and he loved deeply in return. A Mass to celebrate Mark’s life will be held on Saturday, February 16, 11:00 am, at Saint Gabriel Parish, 1150 Mitchell Ave.SE Port Orchard, Washington A reception will follow featuring the artwork of Mark Hoynes. In lieu of flowers, Mark and his family would appreciate donations to the South Kitsap HelpLine or Kaiser Hospice. See donation information below. Mark’s family would like to extend their gratitude to those who supported them during this time. His memory will continue to live on through his family, friends and students. South Kitsap Helpline: online donations may be made at: https://skhelpline.org/give/ Or by mail to: South Kitsap Helpline 1012 Mitchell Ave Port Orchard WA 98366 Please include “In honor of Mark Hoynes” in the memo section Kaiser Hospice: donations in memory of Mark Hoynes may be made/mailed to: Kaiser Permanente Washington ℅ Institutional and Planned Giving - Hospice Program 1950 Franklin Street, 4th Floor Oakland CA 94612 Please include “In honor of Mark Hoynes” in the memo section

Mark Hoynes, 62, was born on May 21, 1956 in Landstuhl, Germany to Emmet and Joy. He passed away on January 18, 2019 at his home in Port Orchard, WA after a brave battle with pancreatic cancer. Mark spent most of his childhood growing up in... View Obituary & Service Information

The family of Mark Hoynes created this Life Tributes page to make it easy to share your memories.