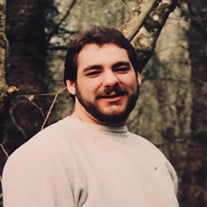 Mark A. Mascioli, was born in Mansfield, Ohio on January 9th, 1968 to Barbara K. Mascioli and Charles Chuck Mascioli. He passed away on October 19th, 2017 peacefully in his sleep due to his long battle with diabetes and kidney failure. Mark was a hardworking man, he graduated from Seminary High School in Poland, Ohio and after that he worked for such places as Fred Meyer, UPS, the U.S Navy assigned to USS Georgia, and eventually PSNS (Puget Sound Naval Shipyard) where he worked on boats in Shop 57 and then was promoted to a training instructor. He put in 29.5 years to government service. Mark was not an only child. He had an older brother (Mike Mascioli), and a younger sister (Julie Maderitz). Mark first married Tana Roberts in January 1992 and they had two beautiful children, his eldest being his daughter (Jordan Mascioli) and his youngest being his son (Joseph Mascioli). Tana and he divorced and he remarried to the one true love of his life Elizabeth JoNell Mascioli on August 2nd, 1999 and he became a stepfather, step grandfather, as well as many other titles to her family. Sadly, he lost her November 9th, 2008. Mark loved to cook, watch TV, fish, joke, “rest his eyes” (although we knew he was sleeping), and was very into Football especially the Green Bay Packers and although he would NEVER admit it.. the Cleveland Browns, NASCAR, and working on cars in which he drove in the KDDA (Kitsap Destruction Derby Association) as car #812 from 2005-2009 where he won a lot of trophies. Mark was very go with the flow and that is part of what made it so easy to get along with him because he was okay to do anything and everything at least once. He was such a smart*** but that’s also part of what everyone loved about him. Mark will be missed deeply by everyone that cared about him and he will forever and for always be in our hearts, and we will carry him wherever we go. “Ohana means family, family means nobody gets left behind or forgotten”. Mark is survived by: Biological Family: Jordan (Matt) Mascioli, Joseph Mascioli, Barbara Mascioli, Julie (Jeff) Maderitz, Mike (Rochelle) Mascioli, Chelsea Mascioli. Step Family: Rob (Christian) Moore, Tina (Mark) Kyle, Elizabeth Moore-Bray, Patricia (Bert) Alter, Tarver Moore, Taylor and Tanner Schmidt, Maci Ray and Houston, Chad and Ashley Bray, Donald, Mark and Kevin Jr. Cockerill, Cody and Aiden Kyle.

Mark A. Mascioli, was born in Mansfield, Ohio on January 9th, 1968 to Barbara K. Mascioli and Charles Chuck Mascioli. He passed away on October 19th, 2017 peacefully in his sleep due to his long battle with diabetes and kidney failure. Mark... View Obituary & Service Information

The family of Mark Allen Mascioli created this Life Tributes page to make it easy to share your memories.

Mark A. Mascioli, was born in Mansfield, Ohio on January 9th,...