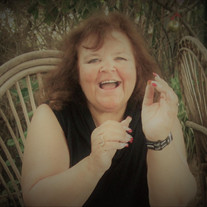 Marsha Anne Warrington, 76, of Port Orchard, WA passed away December 17, 2019. She was born April 2, 1943 in Seattle to Frank and Lydia Watson. Eventually the family moved to Bremerton where she graduated from Central Kitsap High School in 1961. Soon after graduation met her beloved husband George Warrington whom she married in June of 1963. Marsha and George moved to Port Orchard where they raised their family of five children. She enjoyed playing cards with friends, involvement in her children’s soccer leagues, listening to music, dancing and family vacations especially camping. Her greatest joy was being a mother, grandmother and great grandmother and will be remembered as mom to many of the neighborhood children especially Robert and Jon. Later in life she enjoyed vacationing in Mexico, soaking up the sun getting tipsy from drinking margaritas while sitting on the beach. There were also more than a few trips to Nevada with family and friends for some fun and playing at the slot machines. Her passions were for her family, all things fantasy including movies, books, and dragons. Marsha cherished and found great comfort from her dogs. She is preceded in death by her dearly loved parents and is survived by her husband George, six siblings Pat, Rick, Cindy, Pam, Jocko and Dar, five children Wendy, Darrick, Russell (Angie), Bart (Cathy) and Grant, nine grandchildren, Mat, Chelsey, Donavhan, Chad, Collin, Rebekah, Drew, Isabella, and Kimberly and one great granddaughter Caitlynn. Marsha’s love and laughter will be dearly missed. There will be no services for Marsha although the family is planning a celebration on January 11th at the Parkwood Community Center (3045 Madrona Drive SE Port Orchard, WA 98366) from 1:00P.M. – 4:00 P.M.

Marsha Anne Warrington, 76, of Port Orchard, WA passed away December 17, 2019. She was born April 2, 1943 in Seattle to Frank and Lydia Watson. Eventually the family moved to Bremerton where she graduated from Central Kitsap High School in 1961.... View Obituary & Service Information

The family of Marsha Anne Warrington created this Life Tributes page to make it easy to share your memories.