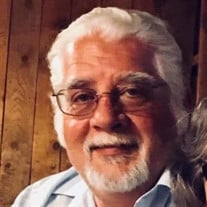 Martin W Levar, Jr., affectionately known as Marty was born October 1, 1955 in Pueblo, Colorado to Martin W. and Geraldine M. (Evans). He was called to be our guardian angel on November 16, 2020 after he passed away from a heart attack. Marty was a farm boy. He milked cows, helped with harvesting crops, bucking hay bales and helped put up food for the live stock for the winter. He was also involved helping with their huge garden which his mother and grandmother canned vegetables from and put up for the winter months for the family. Marty was a doer, he spoke his mind whatever the conversation was, and if you didn’t agree, well that was okay too. He attended Pueblo County High School, graduating in 1973. Soon after graduation he began working for the Government as a Civil Service employee. He had it all figured out as to when his retirement date would be and that is exactly what he did. He retired on October 1, 2010 which still seemed like a long haul for the family. He started out at the Pueblo Army Depot. In 1975 he was to be transferred to Fort Ord on the Monterey Peninsula in California. He was not going to go without his sweetheart. He and Cindy were married August 30, 1975 and then moved to California by the end of September. That is how their amazing journey started. After two years at Fort Ord, California he was transferred to Puget Sound Naval Shipyard in Bremerton, Washington where he remained. Marty started out as an Electronic Mechanic in Shop 67 and slowly climbed the promotion ladder, retiring as a General Foreman “White Hat”. He and Cindy recently celebrated their 45th wedding anniversary. Together they were blessed with four wonderful, beautiful children: Jennifer, Nicole, Brian, and Bret, and later they adopted their oldest grandson Damian bringing the total to five. They also have seven wonderful grandchildren, Damian (grandson/son), Marissa, Makayla, Madison, Seth, Gavin, and Abbi Levar. His children and grandchildren were the apple of his eye. Marty loved the outdoors. He was an avid hunter and fisherman. He loved the time spent with his hunting and fishing partner Gary Petrouskie who he considered as both his brother and his best friend. He loved to garden and play around on his dozer and tractor. He loved camping in the mountains and exploring different areas. Marty loved to cook for everyone! He could whip up anything and it tasted amazing with whatever he had in the kitchen. If you were at the house while he was cooking he expected you to stay and eat. He also loved Cindy’s Dahlias, Hydrangeas, Orchids, and numerous other kinds of flowers. Their fur baby, Ladybug was his other best friend, she was glued to his hip. She keeps looking around for him and hasn’t left his chair many times, just as we are feeling sad, she is also heartbroken. As he begins his journey as our guardian angel, he is reunited with his mother Geraldine and father Levar Sr. He is survived by his loving wife of 45 years, Cindy Levar; daughters Jennifer Cook (Zach), Nicole Levar, twin sons Brian and Bret Levar, and Damian (grandson/son); other grandchildren Marissa, Makayla, and Madison Cook, Seth Rymer, Gavin and Abbi Levar, and bonus granddaughter Karina Mendez; brothers John, Mike, and Frank Levar and sister Susan Bawdon. His family came first, and he loved them all dearly. He will be greatly missed by all. In lieu of flowers please donate to the MS Association or the American Heart Association.

Martin W Levar, Jr., affectionately known as Marty was born October 1, 1955 in Pueblo, Colorado to Martin W. and Geraldine M. (Evans). He was called to be our guardian angel on November 16, 2020 after he passed away from a heart attack. Marty... View Obituary & Service Information

The family of Martin 'Marty' William Levar created this Life Tributes page to make it easy to share your memories.