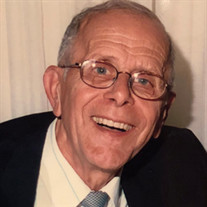 Dr. Marvin “Mariano” Bruno, 83, passed away at home in Port Orchard, WA, on December 11, 2018. He was born in Spokane, Washington, on January 31, 1935 to Alfonso and Angelina Bruno, the youngest of nine children. After attending Lewis and Clark HS in Spokane and obtaining a B.A. in psychology from Gonzaga University, he received both his M.S. and Ph.D. from the University of Portland. During his graduate work in Portland, he met and married, Sandra Citron, the spice of his life, on February 11, 1961. Shortly after, Marv and Sandy moved their family to Omaha, Nebraska, where he worked as a clinical psychologist and taught courses at Creighton University. As the family began to grow, they settled in Washington. In Spokane, Marv was employed at Eastern State Hospital, while also counseling out of their home and teaching classes at the WSU extension in the evenings. Ultimately, Marvin pursued a career as the superintendent of the Francis Hadden Morgan Center, a school and home for children with autism, in Bremerton, WA. Throughout his 20 year tenure, Marv pioneered one of the first successful models for engaging with children on the spectrum, and was a strong supporter for keeping them in their homes. Marv was compassionate in his work and tirelessly advocated for people to be treated with dignity in his field. The children Marv had the opportunity to touch held a special place in his heart. His accomplishments include being elected as a board member for the Autism Society of WA, ARC, and numerous publications in professional journals. Marv’s family was his first priority. He loved his entire family, constantly showering them with special gifts and personal attention. Many fond memories include camping, trips to the Seattle Center, eating pizza, and looking for yard sales. Marv was a faithful member of Saint Gabriel's Catholic Church, serving in the Knights of Columbus. He earned “Knight of the Month” on two separate occasions. A Rosary will be held at 9 AM followed by a Celebration of Marv’s life at 10 AM, December 17 at Rill Chapel. In lieu of flowers, please send donations to the Benedict House, in Bremerton, WA or a charity of your choice.

The family of Marvin Bruno created this Life Tributes page to make it easy to share your memories.