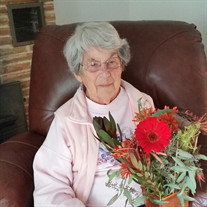 Mary Alice Budd was born at home in South Colby, Washington September 14th, 1922. She was the second of 5 siblings born to Dorothy Rice and Alfred Biggs. Although she passed away in Bremerton at Claremont Assisted Living, she had lived in the family home from 1956 until January 2017. She was preceded in death by her husband, Charles Wayne Budd, three sons; infant son Christopher; Brian 2013; Evan 2015, and her granddaughter Darcy Budd; her parents, brothers Alfred and Harold as well as her sister Dorothy. She is survived by son Dennis (Didi) Budd; Allison Moore (Wilbur Dukes); Tracy (Ken) Offenbach; 7 grandchildren, 6 great grandchildren, and 2 great-great grandchildren. She is also survived by her sister Carol (John) Harlow and numerous extended family members. Mary Alice graduated from West Seattle High School. She and her siblings took the ferry from the Harper Ferry Dock to Seattle for high school. She went to Western Washington and University of Washington when she was young but after marrying our father, traveled with him during his Marine Corps Career. Two of us were born in Seattle, two in Pensacola, Florida and one in Bremerton. After high school and during college mom worked as a telephone operator. During the years that her children were her main job, she was a Cub Scout Den Mother; she was a “transportation specialist”; delivering kids to tap and ballet classes, baseball practice and games, swimming lessons, Special Olympics events, etc. She established the Mary Alice Guild for Retarded Citizens, was active on the state organization for the guilds, and Holly Ridge Center. During those years of volunteering she helped the guild fund raising activities; Annual Sunshine Balloon Sale (14,000 balloons in 1975), ARC Bingo, bake sales, Bazaars and rummage sales. She was a member of the “Roomy Bloomers” the Little League auxiliary baseball team. After losing her husband she packed us up to finish her BA in Education at Western Washington University. After 2 years in Bellingham we moved back to South Colby where Mary Alice became an elementary teacher for South Kitsap School District. She retired after 25 years at 70 years young. She continued volunteering for another 7 years supporting a long-time friend Sharon Tankersley among others. A celebration of her well lived life will be held Monday the 19th of June at the family home in South Colby after 1pm. In lieu of flowers donations can be made to Holly Ridge Center, Special Olympics or Kitsap Humane Society.

Mary Alice Budd was born at home in South Colby, Washington September 14th, 1922. She was the second of 5 siblings born to Dorothy Rice and Alfred Biggs. Although she passed away in Bremerton at Claremont Assisted Living, she had lived in... View Obituary & Service Information

The family of Mary Alice Budd created this Life Tributes page to make it easy to share your memories.