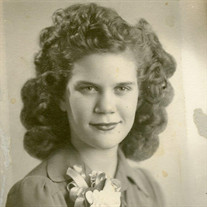 Mary Cecilia Finlay was born May 20, 1928 in Big Wells, Texas to Wallace and Cecilia (Zimmerman) Finlay. The fourth of five children, Henry, Ray and following Bonney and preceding Wallace. She was born in an area that was greatly affected by the Dust Bowl of the 1930’s ravaging prairie and farmlands throughout the United States and Canada. Because of that era and the damage to the local economy her dad moved the family to the Pacific Northwest when he heard about available jobs in the area. He eventually went to work at Bremerton Naval Shipyard. Mary attended public schools in the Bremerton School District. She and her future husband happened to belong to the same high school class of 1946. Mary began working as an usherette in a local movie theater. Later, she worked as a telephone switchboard operator. She met the love of her life, Richard Haney, after high school. They were married at the “Star of The Sea” Roman Catholic Church in Bremerton on October 23, 1948. She was raised Methodist and not convinced that converting to Roman Catholic was a thing she wanted to do, she was married in the rectory instead of the church. They soon began a family with James in 1949, Micheal in 53, Richard in 56, Gregory in 59 and Patty in 62. She loved being a homemaker and mom and once their kids entered school, she quickly became the neighborhood mom and daycare. She did that for some of their nieces and nephews and many of the neighborhood families over the years as well. Mary also volunteered to be a Cub Scout Den Mother for several of her sons. As a Den Mother she began doing crafts for the boys that would later become a favorite hobby. As her children grew up, she decided that she wanted to do something larger with her life and went back to school at Olympic Junior College graduating in 1974 as a licensed practical nurse. She was interning at the old Harrison Hospital on 6th and Chester and they liked her so much they hired her. From 1974 into the 90’s she worked mainly in the Recovery Ward where she was really loved and appreciated for her level of compassion and care. Richard retired first and wanted to start traveling. They did so but initially she had to take a vacation to do it. She eventually retired as well because she really enjoyed traveling and the lifting and helping all sizes and shapes of people at work began to take a toll on her body. She eventually had to have both knees replaced. Travelling was great fun and took them to places and journeys such as a Euro Rail Trip traveling through Europe, England and Ireland on a Rail Pass. Back in the States they took to RV’s and travelled visiting family and friends in places like Arizona and even Mexico. Mexico was also a place they ran errands to for Kahlua and inexpensive, good vanilla. In 1998, they splurged and bought a 32’ Catalina Coachman for their 50th anniversary. Because they honeymooned in Victoria, BC at the Empress touring places like the Butchart Gardens in BC, they made sure to get back there as often as possible. She did have many hobbies along the way. She knitted, crocheted, did needle point and was a gifted seamstress sewing clothing and even making uniforms for things like Richards HS singing group. Mary made Christmas stockings for all her grandchildren. They are now cherished family heirlooms. She was altogether quite crafty and her home became a mini warehouse for fabric, yarn and other supplies. She was an avid reader starting with Harlequin Romance stories then moved on to bigger and better romance and popular novels. Richard bought her a Kindle thinking it might save some money and also make it easier for her because all the books would be in one small place. She wore her first Kindle out fairly quickly. A favorite hangout of theirs was the Boat Shed in Bremerton. They went there many times and all the staff and owners knew them on a first name basis. She learned to cook but at first it was more experimental than good. She did however quickly figure it out and became an excellent cook. Some of the best memories of all were made at Dabob Bay. Friends and family would gather their boats, food and go out there and just have a blast water skiing and fishing and all kinds of other things that made the days go by too quickly. Mary would pack up their picnic stuff with Shasta soda for the kids and some beer for the adults; hotdogs and hamburgers; and of course, there were lots of oysters to steam on the beach. As the kids grew older and started families, the tradition grew and continues to grow. Hanging out and having fun and making memories watching the sun go down and the ebb and flow of the tide, then doing it again the next day. Those were among the things that she loved. Mary is survived by her husband, Richard; her brother, Wallace; her five children, eight grandchildren and five great-grandchildren. On January 2nd, just a short while ago, she went back into the hands of our Lord. She will be greatly missed by those who knew and loved her but never forgotten.

Mary Cecilia Finlay was born May 20, 1928 in Big Wells, Texas to Wallace and Cecilia (Zimmerman) Finlay. The fourth of five children, Henry, Ray and following Bonney and preceding Wallace. She was born in an area that was greatly affected by... View Obituary & Service Information

The family of Mary Cecilia Haney created this Life Tributes page to make it easy to share your memories.