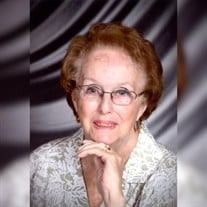 Mary W. Seidel - The Story of my Life Mary Elizabeth Walsh was born at the U.S. Military Academy, West Point, NY. She was the younger of two children, having a brother William (Bill). Mary was extremely proud of her Irish heritage. Both... View Obituary & Service Information

The family of Mary Walsh Seidel created this Life Tributes page to make it easy to share your memories.

Mary W. Seidel - The Story of my Life