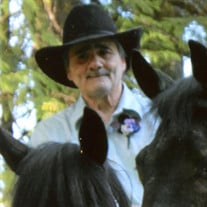 Maxie “Max” Moore, passed away peacefully at home in Belfair, Washington, on December 27th, 2020 after a long battle with cancer and a short battle with Parkinsons. Born in Salinas, California on November 19th, 1955, Max came from humble and difficult beginnings, but led a full and interesting life in his 65 years. After an abusive early childhood, he entered and grew up in foster care. He loved playing the guitar and singing at Church events. Straight out of High School he worked as an artist at the Disney Studios in California. He then served four years in the Air Force, before later working at the Ford Motor Company in Illinois. In later years he owned a construction company in Oregon, before ending up in Washington. Max loved animals, especially dogs and cats! He used to raise cougars and monkeys in his younger days. He even got to take care of Clyde, the orangutan from the Clint Eastwood movie, ‘Every Which Way But Loose.’ During the 1980’s Max rode bulls in the rodeo circuit. Max could fix and build almost anything before cancer and Parkinsons eventually began to erode his body. During 2016-2017 he built a traditional two story House over barn for he and his wife Belinda, only to suffer the tragedy of its total loss to fire just before the holidays of 2017. It was a difficult and painful loss, not just financially, but as it was the last building project using his skills, that his body would allow. In his last years, in addition to the building of his home, and the marriage to his Belinda, he was a doting grandfather to his step grandchildren; James and Aryana. Max is survived by his wife Belinda Moore, stepdaughter Becky Alexander Addams, stepson Dean Alexander, step grandchildren James Alexander and Aryana Addams, and many friends. Max did indeed lead a full and interesting life in his 65 years. Arrangements are under the direction of Rill Chapel of Port Orchard. A celebration of life will be held, April 11th, 2021 between 12-2pm at Camp 1421, Belfair WA. In lieu of flowers, any donation made to the Moore Go Fund Me account to assist with his end of life expenses would be deeply appreciated by the family (Titled - Help Belinda pay Maxie’s funeral & medical bills).

Maxie &#8220;Max&#8221; Moore, passed away peacefully at home in Belfair, Washington, on December 27th, 2020 after a long battle with cancer and a short battle with Parkinsons. Born in Salinas, California on November 19th, 1955, Max came from... View Obituary & Service Information

The family of Maxie Alonzo Moore created this Life Tributes page to make it easy to share your memories.

Maxie “Max” Moore, passed away peacefully at home in Belfair,...