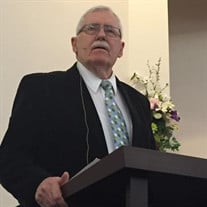 “Now faith is confidence in what we hope for and assurance about what we do not see.” Hebrews 11:1 (NIV) Melvin Lynn Byrd born February 9, 1943 in Dublin, Texas passed away peacefully on March 1, 2022 in Tacoma, Washington. Melvin was one of ten children born to Samuel G. Byrd and Anna L. Byrd (Stanley). He is survived by four sisters: Lois Thomas; Jodi Ammons; Linda Byrd; Ann Lowe; and two brothers George Byrd and Edward Byrd. Melvin is also survived by his wife Barbara Byrd of Port Orchard; his children Sammie Russell; Rebecca Byrd; Jonathan Byrd; Deiva Rountree; Melia McNatt; 13 grandchildren; and 6 great grandchildren. As a young man, Melvin felt called to a life of ministry. Melvin worked as a preacher for over 40 years for the Churches of Christ in Aberdeen, WA; Floydada, TX; Bellevue, NE; and Port Orchard, WA where he eventually retired. Throughout his ministry, he participated in several mission trips to India where he helped support the local church leadership. Melvin and his wife also supported missionaries abroad and remained close friends with those missionary partners. Melvin played a significant role for over 10 years in the Great Northwest Evangelism Workshop that took place in Tacoma, WA during the 1980’s. The GNEW drew in over 3000 people of faith from around the area every year. A huge source of pride for Melvin was his work as a South Kitsap Fire & Rescue Chaplain. Melvin served the South Kitsap community as a lead chaplain for 20 years. When he retired from his Chaplaincy service in 2008, he said, “It has been the greatest thing I’ve done in my ministry — it has been phenomenal. You meet so many people in some of the worst moments of their lives. But it has been very rewarding, and I wouldn’t trade a minute of it.” In reality, words seem inadequate to sum up his life. Melvin was a man full of faith. He lived his life with his eyes and heart focused on heaven. He was a loyal caring son, a supportive brother, a faithful protective husband, a loving father, a fun uncle, and a doting Papa. He was a student always wanting to do better and learn more. He challenged church norms and social norms when it meant doing what was right not what was comfortable. He lived his life through a “leave it better than you found it” mentality. He cared deeply about people, especially those who were hurting. He was a comfort to many, a celebrator of triumph, a man of integrity, quick wit, with a southern drawl. In lieu of flowers, please consider donating to the South Kitsap Fire and Rescue Chaplains fund. Make checks payable to "SKFR- Chaplains Fund." Mail or deliver donations to SKFR, 1974 Fircrest DR SE, Port Orchard, WA 98366 or donate on site at the Life Celebration Service. Thank you from the Byrd Family. Life Celebration Service will be March 26th @ 3:00pm (PT) at the Port Orchard Church of Christ. Service will be live streamed on Youtube- Port Orchard Church of Christ channel @ 3pm. https://www.youtube.com/channel/UCL_SrX11URAkOYw7JOR9ZlQ

The family of Melvin Lynn Byrd created this Life Tributes page to make it easy to share your memories.

“Now faith is confidence in what we hope for and assurance about...